From the moment I’d heard about this book, I’d added it to my TBR. That title, that (adorable) cover, the short description I’d read about small town prom and a queer love story…it was all right up my alley for a light, YA read (which I generally sprinkle into my reading throughout the year for an emotional break/reset and some fun). Anyways, I voted for this one quickly when it showed up as an option for my distance book club’s July read and I’m super glad it won because it was everything I was hoping for!

You Should See Me in a Crown by Leah Johnson 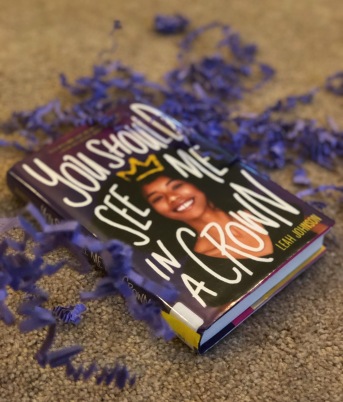 “I never needed this race or a hashtag or the king to be a queen. I was born royalty. All I had to do was pick up my crown.”

Liz is tall, Black and (secretly) likes girls…all things that make her feel like she sticks out just a little too much in her small Midwest town. She’s been counting down the years until she can leave, looking forward to attending the same elite college her mother went to – playing in their orchestra and studying to become a doctor. But when a scholarship she was counting on falls through, one of the only remaining ways to make that dream financially possible is to run for, and win, prom queen (and the attached 10k scholarship). So, Liz faces all her fears and comes off the sidelines and into the spotlight of her school’s (unbelievably intense) prom court competition. Along the way, she faces a lot of challenges and realizations about herself and her friends/classmates, but she also steps up into her own life and, just maybe, falls in love.

Well, this premise is just about one of the most fun ones I’ve ever experienced as a reader. I read a few interviews with the author, who said although this wasn’t her own prom experience, all the events are taken from things that really do happen at schools around the country for prom (if, perhaps, kicked up a notch for dramatic effect). That’s so outrageous to me! Like, prom was a big deal and we got all dressed up and stuff, but this entire competition level of getting onto court, and all the different events (bake-offs and volunteering and GPA and caution against drunk driving acting scenes and poster/button campaigns) are a whole level that I can’t even imagine. Maybe they were exaggerated for effect, but still! Regardless, it was absolutely entertaining, to see what kind of ridiculous campaign moves the contenders would make or be required to get involved in next. Seriously, I enjoyed reading about it so much! True escapism in literary form. I also really liked reading about Liz’s group of friends. They were exactly who I was in high school (I actually highlighted a quote below that stood out to me because it was so dang accurate to my own experience) – someone who had a great/solid group of friends, and participated in a number of activities and had good grades, but was never in the limelight or envied or even, really, “known.” It definitely wasn’t a bad experience (I actually really enjoyed high school, which is definitely a bit different than some of Liz’s own experiences), but it wasn’t like any of the high school stereotypes that one usually sees (and is much more nuanced than those stereotypes capture). I love that YA literature is starting to represent that reality.

Anyways, back to Liz’s friends. They were, for the most part, oddball squad goals and I loved reading about them. I especially loved Jordan, once he was back in the picture more completely. His consistent and all-encompassing support was fantastic. And I appreciated the way he handled his own girlfriend’s situation so much (so much respect to him and to Johnson for writing in that small storyline). Plus, the very final scene, and what he does for Liz in that moment had the tears coming for real. (It was the perfect sweet and happy ending!) On a related note, I was frustrated with Gabi almost from the word go. I appreciate that Johnson made it clear that relationships are always very complicated, and especially because as adolescents that kind of complexity is often seen as if it doesn’t exist, like they’re too young for that level of complication. (Side note: I am here for authors who recognize the intricacies of being a teenager, allow them to be multi-facted, to contain multitudes and not be one-dimensional caricatures, because that’s real…and Johnson provided that recognition to a few of the major characters.) But anyways, Gabi just rubbed me the wrong way from the start and I wasn’t surprised to hear what she had done in the past. And though it was Liz’s choice to forgive or not, and her maturity in that respect does line up with her character, I think I might have been too petty for that. And as a reader I’m still over here mad for Liz. UGH. Kind of with that, there was a definite racist/homophobic character that for sure got some social comeuppance/loss of friends from her behavior, but I was disappointed that it wasn’t more outwardly challenged. I get that that’s (frustratingly) accurate to real life, but it seemed like she more or less got away with some truly abhorrent and hateful things that I hope would have been more strongly dealt with from official channels and, at the very least, her own friends. Anyways, just some side rants there from me; overall, I loved the friend characters.

And of course, Mack, the love-interest. I thought she was a great foil to Liz, with her very different background and comfort level with being out, etc. I thought the chemistry between Mack and Liz was solid, just right for a high school first love, and I enjoyed their getting to know each other development. The “snag,” if you will (trying to do no spoilers), in their relationship fits the story and also allows for a reasonable and sweet reconcile, as we got to see. I liked the dimension that brought to the story for both characters. And though I thought Mack could, maybe, have been flushed out a little more, I wasn’t disappointed by the romance aspect of this novel at all. It got my heart all aflutter with teen-angst-romance-first love feels and that’s exactly what I wanted from it.

One other thing about this novel that I want to point out is the more serious parts. There are a lot of intersectional issues that Johnson addresses through Liz’s character from race to sexuality to inherited and intergenerational marginalizations (specifically, in this case, financial strain and chronic disease – sickle cell) to the death of a parent, all within the context of small-town America, a place that is often (overtly) un-accepting and not-understanding of many of these differences. Now, take this opinion with a grain of salt, as I have never been a queer Black girl from small town America, but I felt like the author did a great job addressing these issues in a way that felt completely genuine. And while perhaps sometimes they threatened to, they were never able to overshadow Liz’s own personality, strength and (especially at the end) pure joy. In those interviews with the author I alluded to earlier, Johnson mentioned that was a balance she had hoped to find, including these points (because not including them would be disingenuous to Liz’s, to Black readers’, realities), but not over-focusing on them to an extent that took Liz’s self out of the story. In my this-book-wasn’t-written-for-me opinion, she did a fantastic job with that.

This book is everything I could have wanted out of a YA novel about a high school prom queen campaign story…and more! I loved the kind of fairy-tale themes that were included and the ways they were simultaneously flipped on their head and given to (a very deserving) Liz – she got the happily ever after ending she would have wanted, not by anyone else’s definition of what that ending should be. So cute and satisfying! And oh goodness, I cried like six times over the last 50 or so pages, for all sorts of reasons (family connection, best friends, support systems, bittersweet and super sweet moments). My heart swelled so freaking much it was almost uncomfortable in my chest and I wouldn’t trade that feeling for anything. I made a note partway through that this novel felt like a high school anthem, like those songs that everyone knew and jumped up and down to, belting out all the words super loud and off-key, when they came on the radio (or mix CD? – I was in high school before Pandora and Spotify so I can’t really say playlist…ooof, I’m getting old). Anyways, after finishing and sitting with this for a bit, I stand by that. This book is an anthem and I hope it gets big enough that we’ll all know the words.

Some passages/quotes that stuck with me as I read:

“When you already feel like everything about you makes you stand out, it just makes sense to find as many ways to blend in as you can.”

“…despite everything, my hard work might not ever be enough.”

“High school is complicated, and the lines of demarcation that The Breakfast Club said divided us aren’t quite so clean-cut. The athletes are also the smart kids; the theater kids are also the presidents of the student council. But there’s still those outliers. The people who are everywhere but fit nowhere. People who are involved but not envied – present but imperfect – so the scrutiny pushes them out of the race.” (I identified really hard with this passage, on a personal level.)

“I never needed this race or a hashtag or the king to be a queen. I was born royalty. All I had to do was pick up my crown.” (WHAT A LINE!!)

“Feeling special in a town that doesn’t feel special at all is worth all sorts of madness.”

“I’m genuinely, unabashedly happy to be in this place with these people on this night.” (I have felt this way a couple times in my life, these perfect moments, and there are no words for them. They’ll stay with me forever.)

4 thoughts on “You Should See Me in a Crown”