I know I don’t usually read children’s/middle grade books, and Woodson has written “adult” books, so I’m not really sure what made me feel like this needed to be the first one by her that I read. But there was definitely a reason, because I bought this a year or so ago and have had it on my shortlist since then. Granted, and clearly, it’s a very long shortlist. But I’m working on it! 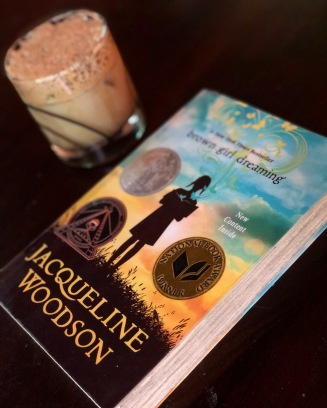 “I want to write this down, that the revolution is like / a merry-go-round, history always being made / somewhere. And maybe for a short time, / we’re a part of that history. And then the ride stops / and out turn is over.”

In this memoir written in verse, Woodson gives the reader a glimpse at what her life was like growing up. From Ohio to South Carolina to New York City, Woodson recounts experiences with family, friends, school, dreams of becoming a writer, life before and during the Civil Rights Movement of the 1960s (from the different perspectives of both the North and the South), and the way a child sees, interprets and learns to move in the world.

This was incredible. Like I said, I don’t read a lot of middle grade, so I can’t speak to it in comparison with other books for the age group, but I feel like this was a sensitive, moving, clear, emotional and educational memoir – completely accessible for middle grade readers and no less impactful for adult readers. Each poem is a wonderfully evocative snapshot of a moments in Woodson’s past. They read like snatched remembrances, wisps of memories, and are so succinct in their evocativeness; yet they come together to provide such a complete feeling of what Woodson’s childhood was like. In particular, the final poems, those in Part V as the memoir comes to a close, were all, for lack of a better term (or, to specifically use a term that truly encapsulates how strongly I reacted to them emotionally), lit. Two in particular from this section that I want to point out, in addition to some of the pull quotes/passages I’m including below (like always) are say it loud and every wish, one dream and what i believe. Also, I listened to the audio for this book, as I read, which Woodson herself narrates, and the cadence of her voice and words is absolutely mesmerizing.

There are a few themes that are particularly strong throughout this memoir that I want to touch on quickly. First, as Woodson grows, she realizes more and more that writing and making up stories is her calling, different from her siblings and perhaps harder to conceptualize for her family, but no less strong of a pull. The way she discovers and leans into that part of her is both sweet and strong and a really great message to young readers about following your heart. (Cute/fun side note – I loved when she talked about the butterfly books she wrote as a child. I totally wrote, and then made many copies of to “sell” to relatives, a book about butterflies as a kid. It just made me laugh to remember that when I read those poems.) Also, the poems when she touches on her experiences with her family’s life (especially on trips to/when living in the South) before the Civil Rights Movement (so, to be clear, Jim Crow) and then later, during the Movement itself (looking up to such leaders as Angela Davis) is just so profound. The way she so clearly communicates what that was like to navigate as a child, the parts she both objectively understood versus subjectively experienced, and the way she processed all that, along with overhead snippets from adults/news…it’s hard to fathom all the ways those experiences changed and shaped her, what and how she internalized without even necessarily realizing it. And yet, she is able to show how she moved though it, emotionally and logistically, in a way that young readers can understand and connect with. It’s really impressive writing and very important concepts and sentiments for today’s youth to recognize and empathize with.

In the Author’s Note at the end, Woodson talks about her family, the richness of their family stories and history and a generation-to-generation effort to work to make the world a better place for the next generation. This really struck me deeply, because you can tell throughout the memoir, her words honor the work of the generations before her and show how that shaped her own understanding of continuing that work herself. It’s a striking perspective difference from my own family mantra, growing up, that every generation should do better than the one before. At first blush they seem similar, but the outward look and civic motivations for Woodson’s family “motto” are in great contrast with the personalized and inner focus of my family’s. It’s a difference I’ve been sitting with since finishing, and will continue to sit with, as I deconstruct what privileges, or lack thereof, shaped those differing philosophical outlooks, and reconstruct a new perspective for myself. Anyways, just some personal reflection to end the review. But the important thing is, this was a fantastic memoir, the medium of verse was used perfectly, and I will definitely encourage any middle-grade youth that I know (not many right now, but lots of babies who are going to grow up and be old enough for it one day!) to read it. Oh, and I’ll definitely be picking up some of Woodson’s adult lit now.

A few specific lines/passages from poems that I loved and wanted to share specifically:

“Somewhere in my brain / each laugh, tear and lullaby / becomes memory.”

“The empty swing set reminds us of this– / that what is bad won’t be bad forever, / and what is good can sometimes last / a long, long time.”

“I know / if I wanted to / I could write anything. / Letters becoming words, words gathering meaning, / becoming / thoughts outside my head / becoming sentences”

“I am in the world but not of the world.”

“I want to catch words one day. I want to hold them / then blow gently, / watch them float / right out of my hands.”

“And on those days, so much light and warmth fills / the room that it’s hard not to believe / in a little bit / of everything.”

“Already there are so many things I don’t understand, why / someone would have to die / or even fight for what they believe in. / Why the cops would want someone who is trying / to change the world / in jail. / We are not afraid to die, Maria and I shout, fists high, / for what we believe in. / But both of us know – we’d rather keep believing / and live.”