Well, I finally did it. I read this book. I have been so hesitant because the hype for this one is legitimately beyond real and I just figured there’s no way it stands up. Plus, I can’t lie, without the hype, it’s not one that I would for sure pick up just after reading the description, so that added to my hesitancy. But… One of the prompts for The Reading Women Challenge 2020 (prompt #19) is a book that is “frequently recommended to you.” This could have been a lot of books, truthfully, but after a Holiday party for my gym last year, at which I stood in a circle of people all talking about books we’ve read/loved (yup, cause that’s how good I am at parties) and every single person there had read and loved this one except me (and they all urged me to go for it), it had to be my choice.

Where the Crawdads Sing by Delia Owens 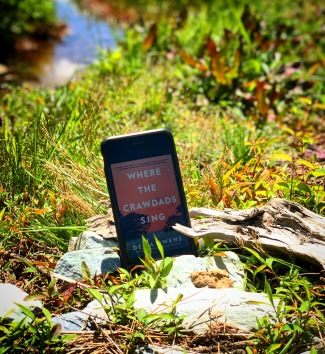 “Autumn leaves don’t fall; they fly. They take their time and wander on this, their only chance to soar. Reflecting sunlight, they swirled and sailed and fluttered on the wind drafts.”

Kya Clark is known as the Marsh Girl. Abandoned by her family as a young girl in the early 1950s in the marshes on the coast of NC, she basically raises herself, learning to survive alone, with only the gulls and other marsh nature as her friends. But she’s not the feral creature everyone supposes, rather she is shy and sensitive, looking for a family/friends that won’t leave her like everyone else has. And when a single town-dweller her age, a boy named Tate, starts to visit her, teaching her to read and learn about her surroundings not just through experience, but book research as well, she grows into an intelligent, though still very removed, young woman. Years later, when the nearby town’s “golden boy,” Chase Andrews, is found dead in the marsh, the town’s suspicions are immediately drawn to this mysterious and different “Marsh Girl” as a prime suspect, and Kya is drawn into an investigation and trial for her life.

For all the reviews and summaries of this book I have read, none of it quite prepared me for this book. And I am grateful for that, as it made the reading (or listening, in my case, as I went with the audiobook option) a much cleaner and fuller experience. First, I definitely have to say that the crowning glory of this novel is the way Owens’ writes about the marsh. The love and respect for nature comes through, shining and strong, on every single page. And it’s not just the descriptions of the plant and animal life, though they are gorgeous, but it’s the way that the nature of the marsh-life is written into every aspect of the story, from Kya’s romantic experiences to the unfolding of the murder mystery. It’s pervasive in the smoothest way and beautiful in a way that, despite the many harsh aspects of Kya’s own story, envelopes you in a warm, homey embrace. This juxtaposition of an ode to the beauty of nature and an exploration of some of the harshest realities of humanity is reminiscent of (at least for me) the ode to nature that was such a primary aspect of My Absolute Darling by Gabriel Tallent (a favorite of mine from a few years ago). Overall, too, beyond just the parts about nature, the writing and dialogue were melodious and compelling, and the narrator really did it all justice.

As for the plot itself, there was more going on than I had anticipated. The novel starts being told in two time periods and, back and forth, we learn about Kya’s past and watch as the town’s police discover Chase’s body and start to gather evidence. The two timelines come together right around when the sheriff feels like there is enough evidence to arrest Kya, and the last quarter, or so, of the book, follows the unfolding of the trial and post-trial events. While there were moments where things felt like they were progressing slowly, at least at the beginning as we get information about Kya’s youngest days, it is important for all that “background” to be fully set and conveyed. Knowing all about her youth, growing up, her experiences with both Tate and Chase…it all paints a picture of this unique character that allows the reader to really feel like we “know” her, as she faces the trial and charges against her. Without that, or by rushing those earlier parts, I think the full weight of the potential consequences wouldn’t have felt as heavy for me, nor would I have been as invested in the outcome. And, let me tell you, I was invested…more than I thought I would be. Also (bear with me, as I attempt to do this without spoilers), I absolutely felt like the jury made the right decision in the trial. It was my opinion from the beginning. Which made the revelations right at the end quite a surprise for me, though not at all unsatisfying ones (in fact, I was exquisitely satisfied by them). And while I have yet to decide whether I think what actually happened was in or out of character for the Kya I “knew,” I am incredibly impressed with Owens’ writing, to make her feel so real that I thought I knew her, and then to make me believe what I thought I knew of her so strongly that I was effectively blinded to other outcomes/options. Slow clap. (Side note: anyone else feel very concerned with how recently in the history of our criminal justice system this preponderance of “circumstantial” evidence is really the only thing that jurors had to go on when making such incredibly important and life-altering decisions?? I kept wanting DNA or fibers testing evidence to be pulled out and it was, frighteningly, nowhere to be found.)

This was truly a lovely piece of historical fiction and natural writing. It was all about atmosphere, with lush character development and setting descriptions that sink into your very bones in the same way that the marsh sunk into Kya herself. I get the hype. For some small reasons, mainly personal preference, this is not a new favorite, yet neither do I feel at all let down…which is no mean feat, considering the size for the expectations this book had to live up to. This is, for sure, a magnificent piece of literature and I am really enjoying the sense of haunting hopefulness I am left with after finishing.

Just a few quotes I marked while reading and wanted to share:

“His dad had told him many times that the definition of a real man is one who cries without shame, reads poetry with his heart, feels opera in his soul, and does what’s necessary to defend a woman.”

“Why should the injured, the still bleeding, bear the onus of forgiveness?”

“Being isolated was one thing. Living in fear was quite another.”

22 thoughts on “Where the Crawdads Sing”