This book was neither on my radar nor my TBR until just a few weeks ago, when one of my fellow bookstagrammers, @beingabookwyrm, started the hashtag #READETHIOPIAN, to spread awareness of books by Ethiopian authors. And literally the day after I saw her post about this book, it was on the new book shelf as I was browsing at my library. So, I threw my TBR up-nexts out the window and grabbed this one instead.

The Shadow King by Maaza Mengiste 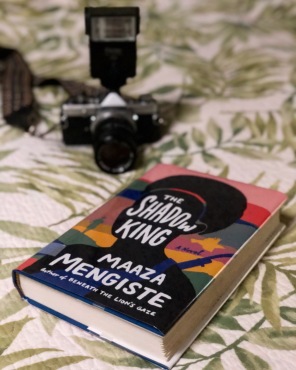 “She has no body, no heart, no tongue, no breath. Only a fire bubbling inside, trembling like a tightening fist, pushing against her throat, climbing into her head, stretching inside her until there is no past. There is no future. There is no time that is not here.”

The Shadow King is historical fiction set in Ethiopia in the mid-1930s when Mussolini’s Italian troops invaded the country. Hirut has just been orphaned and is adjusting to life as a servant in Kidane and his wife Aster’s household. Kidane is an officer in the Ethiopian army and, as a member of his household, Hirut is pulled into conflict, eventually becoming a soldier in her own right. But not only does she deal with fighting the vastly technologically superior Italian army, she also works to tend the wounded after each battle, and faces her own personal struggles with Kidane’s unwanted and forced advances, as well as many humiliations at the hands of the Italians, specifically Jewish photographer Ettore, after she is captured.

First, I have to be completely honest and say that I had no idea that Italy’s invasion of Ethiopia was one of the first conflicts in the Second World War, or, truly, that it was a front in the war at all, at any point. It’s embarrassing and really unacceptable that I don’t remember being taught about it at all in school – what a complete and ridiculous oversight by public education. Not a surprise, not even close to the first time I’ve learned about a time period or situation that I had no idea about, regardless of my many years in the public school system – but still, a condemnation of the system for sure. In any case, yet again I am shown why reading is so important to broaden horizons and learn, no matter how old you are. So yes, as a historical fiction piece, this was fantastic and educational and horribly insightful (TW for many forms of violence and trauma) in an important and necessary way.

I also appreciated the inclusion of Ettore’s perspective, as a Jewish-Italian soldier. It gave great depth to the story, to see not only the affect of the invasion and war on Ethiopia and its people, but also on the other (much more well-known) victims of WWII, and the ethical and allegiant struggles of that population. Ettore was not comfortable with what he was asked to do, but felt he had no choice as an “unprotected” citizen, feeling that his only protection came with following orders, even when he knew they were wrong. Honestly, it was fascinating because both objectively and subjectively Hirut and Aster and the rest of the people of Ethiopia suffered far worse than Ettore and the Italians in Ethiopia (Jewish or otherwise), and yet there is still a kernel of pity for Ettore and his situation within Hirut and, I’d guess, many readers. That kind of subtle character development and situational grey-space is the mark of phenomenal writing. But anyways, back to the main part of the story – Hirut and Aster and the rest of the women in the Ethiopian army were a gorgeous focal population. I loved learning about them, their role(s) in fighting for their country, Hirut’s idea for the shadow king and how successfully that strategy played out, and just generally the events of the time period and location that I knew nothing about. I definitely spent quite a bit of time on Google while I was reading, searching for more context and details.

As far as the writing, it was so unique. To start, it was a little difficult to find the flow, as it alternated between lush descriptions and choppy interactions. Plus, the various perspectives, including interludes from the Emperor himself, a “chorus” in the Greek tradition, and descriptions of the photographs that Ettore takes/develops, along with the regular narration from Hirut (which took getting used to in its own way), were not easy to follow right away. Plus, there are no quotation marks used for dialogue; which is fine, but definitely an adjustment. But oh my goodness, once I caught the pacing and settled into the movement, it was gorgeous. As a note, I did find that every time I put the book down, I’d struggle to re-find that flow again once I picked it back up…so after the first few times, I realized it was a novel meant to be read in larger chunks, and I made time and actually read the entire second half in one sitting. That was, for me, the right way to do it. I lost myself in the book after I realized that and sailed right through to the end.

I do want to note that this was not a quick read for me. Like I said, I struggled to get back into it every time I put it down. When I changed up my pattern and gave myself time to sink into it for however long it took to finish, things really picked up for me. But overall, it was about a 3-week reading process, which is very slow for me. I know for sure that the style will not be for everyone, so please be aware of that, and open-minded to it, if you pick this up. Also, I do feel like it felt as long as it was. I can’t necessarily say that it dragged – all the perspectives helped really elucidate the setting and experience and time period – but it was definitely a slow-paced novel. And this is a book that took effort to read. A deserved effort, one that I felt was worth it, but significant effort all the same. I just want to be up-front about my review, as many of my comments are positive (and I stand by them), but there were also a lot of challenges to the actual reading process, for me.

I really appreciate my time spent with this novel. I want to make it clear that it was lyrical and educational and the complexity of the characters and authentic exploration of what it means to be a woman in a war were excellently written. Really this book is something special. But it’s also one that I recommend with a caution – to be ready for the unique style and in the mood for a slower-paced and exploratory educational reading experience.

“Not many are born when they should be. How I hope this time is meant for you.”

“She is one woman. She is many women. She is all the sound that exists in the world.”

“…a fact that has always been so: that the dead area stronger. That they know no physical boundaries. They reside in the corners of every memory and rise up, again and again, to resist all our efforts to leave them behind and let them rest.”

“See this man in the tender moment before he takes his wife. See him wrestle with the first blooms of untapped emotion. Let the minutes stretch. Remove the expectations of a father. Remove the admonishments to stand tall and stay strong. Eliminate the birthright, the privilege of nobility, the weight of ancestors and blood. Erase his father’s name and that of his grandfather’s father and that of the long line of men before them. Let him stand in the middle of that empty bedroom in his wedding tunic and trousers, in this gilded cape and gold ring, and then disappear his name, too. Make of him nothing and see what emerges willingly, without taint of duty or fear.”

“There is no escape but what you make on your own.”

“Here is the truth he wants to ignore: that what is forged into memory tucks itself into bone and muscle. It will always be there and it will follow us to the grave.”

10 thoughts on “The Shadow King”