I don’t have a big or exciting intro about this one – it’s been on my TBR since I first read about its publication last year. The combination of it being available at the library as an audiobook just when I was looking for my next listen meant the time was right. Also, this ended up being my book for the October Just One More Pa(i)ge Reading Challenge prompt – read a book centered around close friends and relationships – because there was such a wide and complex set of friends in this book. And, as it was in honor of Bullying Prevention Month, it was very convenient that the cover was also blue!

Anger Is a Gift by Mark Oshiro 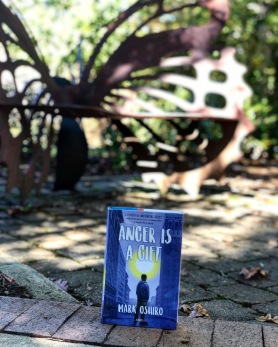 “He’d been cursed by violence and loss. He’d been blessed with love and support. He couldn’t separate them, and he had to learn to live with both.”

Years ago, Moss Jeffries’ father was killed by the Oakland PD. And now, as a sophomore in high school, he’s still struggling with anxiety and PTSD about the event – a fact that he is very embarrassed about, especially when it causes him to have a panic attack in front of a cute boy he just met. But that boy, Javier, seems to be totally accepting of it, and Moss excitedly and nervously embarks into his first dating experiences. At the same time that his relationship with Javier is heating up, things elsewhere start to fall apart. His school is decrepit and, after an SRO attacks one of his friends, the school installs metal detectors to “avoid” future similar events. But the student body is not having it; the school cannot blame them for the violence on its campus. So, they plan a peaceful protest…that turns deadly when details are leaked to the police. And things go from bad to worse for Moss, who must face his fears in order to get justice for himself and his friends. Though things continue to get worse before they, hopefully, take a final turn for the better.

This is the most difficult review I’ve had to write in quite a while. I want to give it two categorically different ratings at the same time and I don’t know how to compromise that. Let me start with the things that bothered me, that made me want to give it a bad rating, because then I can end on a positive note. The biggest, most pervasive issue I had, and one that affected a lot of my interactions with the plot, was that the writing was simply…not good. It was basic and choppy and the dialogue was incredibly stilted and awkward. And that, for me, is a deal breaker. Realistic (or not) dialogue is one of the biggest aspects of a book that can make or break a read for me. I really appreciated the fact that I was listening to it so I could speed up the playback and hurry through that discomfort. Also, I felt like the characters were all really naïve for their age. Now, I work with high schoolers, and I absolutely admit that some are much more socially “aware” and politically active than others. However, as throughout the novel we get more and more background on the characters’ lives, it does not make sense that, after their myriad (difficult) life experiences, that they would be so unaware and misunderstanding of the reality of their school administration, law enforcement, etc. It doesn’t excuse the lack of [social] justice in their lives, and they should never have to deal with these issues in the first place, but seriously I feel like they wouldn’t be so guileless in real life. And on another general note in regards to the characters, I felt like they were all really one-dimensional and underdeveloped. They all just seemed like placeholders or sketches.

Then there are two plot points that I want to mention specifically. I really really disliked the way Moss treated his “best friend” Esperanza at the end of the book. Yes, she stuck herself into some situations that she should have been more of a support person for, but what her parents did was not any more her fault than it was Moss’ own fault for “letting them be involved” in the first place. And ok, I get that he’s emotional and first reactions, etc., so I’d forgive that, but what really got me upset was the message the author sends at the end – when only after getting roughed up at a rally could she “really understand” the issue. The rest of the messages in the book, about fighting the police brutality and social injustices by the law enforcement system in the city, were so good. But that “lesson,” that a person cannot be a true ally without experiencing violence firsthand, is alienating and dangerous. Suffering state violence is not a club one should have to join in order to fight it, especially since eradication of that exact violence is the goal of all these protests in the first place. It also discourages anyone from outside these communities from helping protest and fight on their behalf. And I understand Esperanza did overstep a time or two, and addressing that (the correct “role” to be in as an ally) is important and necessary, but the way it was handled at the end was definitely not productive or healthy, in my opinion.

Finally…the ending. Ugh. Things were going ok until the last like, page or so, and I was super frustrated with the police officer’s final actions/speech. I don’t want to give spoilers, and I want to not be this cynical, but OMG it just wouldn’t happen like that. And even if there were proper inquests, etc., it still wouldn’t happen that way. And it was so brutally realistic until then in a way that I appreciated for its reality. And that ending just…felt so wrong. Bad note to end on.

As for the things that I did like. I alluded to it already, but I felt like the author did a great job portraying the horrifically fearful reality that so many of America’s minority youth live today. It’s unbearably hard to read and can only be even worse to live. It does a great job showing how circumstances and “media spin” conspire to create situations that are literally the exact opposite of conducive to success. We are literally grooming entire communities of youth for failure that is completely out of their control. And the fact that this is so present even (especially) when they are at school, a place that should provide a haven and a focus on education, not distraction from it…I know that’s real, but dammit how have we let that happen?! Also, just the general issue of police brutality: it’s dystopian in its unreality, but it’s freaking real. The title is explained in the book in a way that suggests the anger that the youth feel about these circumstances is a gift that can help fuel their fight out of it, but I feel like there’s another meaning there, because honestly the gift this book gave me was anger, literal mountains of it. SO. MUCH. ANGER. (I just wish it was written better, because the overall plights of the specific characters in this novel didn’t feel as compelling as they should have, since the writing separated me from feeling as invested as I wanted to have been.)

Another thing I liked was the natural diversity in race, sexuality, gender and ability of the characters. It was just as cursory/surface-level as the characters themselves, but since the rest of the plot/writing was like that, looking at it through than lens makes it seem unforced. A weird way to look at it, but I want to try and be objective and appreciate the breadth of representation. Oshiro also did a fantastic job representing both general teenage anxiety and the more diagnostic level that Moss has as a result of his PTSD. It sometimes got frustratingly repetitive to “listen” to Moss’ inner monologues on everything from his worries about Javier’s interest in him to the issues at his school to, later on, the complications of some of his friendships and the new tragedy he’s facing/his fight with the police, etc. But that repetition is realistic and understandable and provides legitimate insight into insecurity and dealing with anxiety as a teenager.

Overall, I’m just so split in my feelings about this novel. It’s such an important story that needs to be told – widely and often – because we need awareness and anger in the fight against it all. But Oshiro’s writing just didn’t do it the justice it deserved, and that was so frustrating. The promise was there, but the execution just…wasn’t. I think books like THUG and American Street do a much better job at telling these stories (state violence and media bias against minority youth), but neither quite show the same side that this one does, and that’s a huge part of the reason I was so disappointed about it falling through.

If you’ve read this, I’d love to know your thoughts. Do you agree with me or not? And what other similar books would you recommend that address this topic (perhaps with better writing)?

4 thoughts on “Anger Is a Gift”