I’ve wanted to read something by Anna-Marie McLemore for awhile now. I love magical realism and all her stories sound so wonderful. Over the years, the book I wanted to start with changed, but the wanting itself never did. And this Hispanic Heritage Month seemed like the perfect time to finally pick one up. Why this one? I can’t give you a reason, to be honest, but I guess the description called out to my current feels enough to make it the one.

When the Moon Was Ours by Anna-Marie McLemore 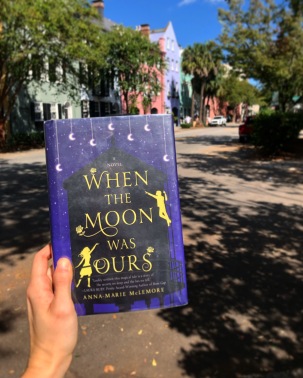 Miel and Sam are best friends, and, as they’re getting older, perhaps more than that. But they’re both a bit…odd…too. Roses grow out of Miel’s wrist and Sam has his own secrets. There are many other magical things about their lives as well, like Miel’s sister, who can cure lovesickness, and Sam’s hobby of painting and hanging moons all over town. And then there are the Bonner sisters, four sisters who have the run of the town, get everything they want, are known as witches. When the sisters decide they want Miel’s roses, they use all their power, prying into the secrets Miel and Sam keep, to get them. But Miel is stronger than they know and will not give up that part of her easily, nor will she stand down in protecting those she loves, no matter what it costs her.

Wow – the language in this novel is simply breathtaking. It’s the perfect magical fairy tale language, sweeping and lyrical and everything you want from a story of magical realism. The literal and figurative color throughout is just lovely. With that in mind, this is also not a fast book, but rather one in which every line is written to be savored, and must be read with the appropriate deliberateness. So, just make sure that’s the type of mood you’re in before you pick it up. I wasn’t quite there, so I objectively recognize the beauty, but didn’t quite feel it 100% of the time.

The story itself is just a gorgeous as the writing. There are so many beautiful and important messages woven into the meat of this story. McLemore does a wonderful job showing how you don’t have to deal with everything on your own, the value in letting people in, even if they cannot do anything but be there for/with you, lessons in how exactly to do that, and the comfort that comes from knowing that love and acceptance. Past that, the exploration of the difficulties and wonders of coming of age, coming of identity, and coming of…love (I guess that’s a way to say it), are all so smoothly interlaced. It’s clear that there is so much feeling on every page and, after reading the afterward, I totally understand now – the experiences on the page are such personal ones for McLemore and her husband and it shines through powerfully and poignantly. And in a way unique to fairy tales, even ones that have some dark, haunted edges like this one, heavy and difficult themes are addressed in a way that is softened by the whimsy and magic and metaphor of the telling. Though the pain is clear and real, it’s somehow…lessened; you get the full understanding without the need to fully carry it. Topics like gender transitioning, traumatic childhood events and extreme bullying (for lack of a better term), are expressed through fear of pumpkins, being trapped in a glass box in the woods, having wrist-roses stolen from you without your consent, and more. It allows fantasy to take the edge off the reality of the experiences.

Altogether, this was just a wonderfully fanciful, though never light/fluffy, tale; magical realism in top form. And the vulnerability and emotional realities of the characters shine through so strongly, as the author writes them from her personal experiences. I really enjoyed the enchanted, yet recognizable, journey McLemore took me on.

As I said, the language was exquisite – it was a struggle to narrow my pull quotes down even to this many. Enjoy them:

“He wanted to give her every light that had ever hung in the night sky.”

“Yes, they were words. They were all just words. But each of them was wrong, and they stuck to him. Each one was a golden fire ant, and they were biting his arms and his neck and his bound-flat chest, leaving him bleeding and burning.”

“The unsaid words clung to her like foil stars. She felt the light from his moons tracing them, the shadows of lunar seas leaving their outlines on her skin. She would wear this night – those words, said and unsaid – on her body. Whether the points of those stars would cut into her hinged on whether she answered what he could not say.”

“He had the gravity of the moon in the sky. He could pull on oceans and rivers. He could drag lakes across deserts. There was enough force in him to turn the river that held her to light.”

“There were apologies too heavy for their tongues. Even too heavy for any one set of their hands. So this one, they shared. They carried it together. They interlaced their fingers, her against his, and held it in their palms. They wore it on their skin. They guarded it in the breath of space between their bodies.”

“The truth slid over her skin, that if she loved him, sometimes it would mean doing nothing. It would mean being still. It would mean saying nothing, but standing close enough so he would know she was there, that she was staying.”

“She was the wild blossoms and dark sugar that spoke of what the world could be. She was the pale stars on her brown skin. She was the whole sky. …she was the girl who gave his moons somewhere to go. She was the dark amber of beechwood honey, the caramel of sourwood, and the bitter aftertaste of heather and pine. She was every shade of blue between two midnights.”

7 thoughts on “When the Moon Was Ours”