I picked up this memoir/essay/commentary collection at one of my library’s used book sales at least a year ago. But I’ve been trying to focus hard on balancing library/new release reads with catching up on some of my backlist book titles, so it made it off the TBR and onto the “currently reading” list as a part of those efforts. Now, I have never listened to Robinson’s podcast, 2 Dope Queens, before (I am not really a podcast person, I’m more into audiobooks). And actually, to be honest, since I’m not really an aficionado on the comedy scene either, I can’t say I had even heard of her before. But for some reason, the cover/title/description blurb for this book called out to me from the stack it was in and, for $2, I figured it was worth the gamble. Spoiler alert: it totally was!

You Can’t Touch My Hair: And Other Things I Still Have to Explain 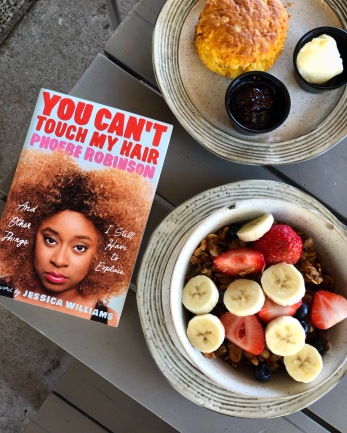 In this collection, Robinson talks about everything from her guilty pleasures (even though she doesn’t agree with the concept that she should feel guilty for liking them) to the reality being a black woman in America/comedy/any workplace to her (both realistic and absurd) requests of the first female president and more (much more) about race in America.

The first thing I have to say about this book is that the conversational tone of the writing is phenomenal. Now, this may be slightly influenced by the fact that I listened to the audiobook, which Robinson reads herself, but still…more so than any other author-narrated memoir I’ve read/listened to, it was like she was in the car with me, talking right to me. I assume this is, in part, because she has experience with her podcast. And podcasts, from my limited listening, tend to be very casual and conversational. Regardless of how she manages it though, and if it’s just her natural style or if it’s something more practiced that she’s perfected, I was very into it and it made for one of the best listening experiences I’ve ever had.

Topically, it’s actually really surprising how much of this book actually talks about and explores serious race and gender (and the intersectionality of being a black woman) issues. And don’t get me wrong, I don’t say that because I’m surprised at Robinson wanting or being able to discuss it all that much/well. Rather, I’m surprised because, for the most part, it never feels that serious. Here, we come back to her writing style, which I’ve already spoken about. But her ability to infuse humor and familiarity into her tone cushions the blow, in a major way, for all the depth and truth she is dropping. From talking about the horribly racist/anti-feminist reality of casting calls to the common relegation of black people to being “the black friend” or the single spokesperson for their entire race to addressing the myth of the angry black woman, there is something about her vocabulary and pop culture references that makes it an “easier” way to read about these issues than most black feminist nonfiction that I’ve read recently (i.e. Sister Outsider by Audre Lorde or Eloquent Rage by Brittany Cooper). The comedic addressing of these issues does not, should never, take away from the reality/gravity of them. Nor should the [white] reader not take the issues seriously because they are delivered in such a way. Nor should such prestigious works, such as Lorde’s writing, not be read exclusively in favor of more “comfortable” delivery like this. But it’s a nice addition to the genre. A way to reinforce and entertain simultaneously. Because sometimes reality, like the reality of living in an America that elected our current president (an America where that is even possible) and all the horrific backsliding on racist/feminist fronts that came as a result, needs some humor to help us cope.

Anyways, back to the topics Robinson covers. My favorite section was her requests to the first female president. From getting rid of the obsession with the thigh-gap to helping the world get comfortable with the word vagina (and vaginas in general) this was just a fantastic set of (mostly) legitimate yet ridiculously-presented requests, and I loved it. I also really enjoyed the first chapters, which give a lot of really full information on black hair, in practice and the history of, which is almost completely new/foreign information for me. It was educational and fascinating and I really appreciated her sharing that cultural experience with readers of all (not-black) hair. As I mentioned, the not-so-guilty pleasures chapter was straight hilarious – I laughed out loud a number of times during that one. And her insights and sharing of experiences in the chapters about “welcome to being black” and “uppity” and “angry black woman myth” were important additions to the body of work from black women sharing these experiences and making it common knowledge that this is both insidious and still happening and absolutely inappropriate/must be stopped immediately. Robinson also does a phenomenal job at calling out the white people she has interacted with who have whether inadvertently or due to unforgiveable unawareness, acted in incredibly racist ways. As a white reader, it’s important to internalize these situations, not to be defensive about them, so that we can avoid being that person, so that we can do/be better, in our own lives and interactions. Last, the sections of letters to her niece Olivia was sweet and heartfelt and full of actually legit advice (I hope Olivia takes it all to heart when she’s old enough to read it) and warnings that you wish she didn’t have to gives and great messages to all readers on how to appropriately appreciate the strength of black women and action steps on how to truly make the world a more accepting place. It was the perfect way to wrap up the collection.

As the blurb on the back says, this book truly is one of the best combinations of the personal and the political, the humorous and the powerful. It’s definitely the best collection by a female comedian that I can remember reading (and I have read a number of them, including by Amy Poehler, Tiffany Haddish, Mindy Kaling, Lauren Graham, Caitlin Moran…not counting Anna Kendrick because I love her for other reasons and personally identified with a lot of her feels, and Trevor Noah’s was a masterpiece, though he’s not a female). Anyways, I thoroughly enjoyed my experience with these essays and I definitely recommend this collection (especially if you are into pop-culture…her references are continuous and delightful).

8 thoughts on “You Can’t Touch My Hair”