This was absolutely an impulse pick-up at the library a few weeks ago. I mean, I’d had it on my radar, but I had totally planned to read Stone’s first novel, Dear Martin, before reading this one. I mean really, they have nothing to do with each other, so I have no idea why I felt that way…sometimes publication order gets in my head. But anyways, this was on an end-cap display for Pride month and I actually had had no idea, until then, that Stone identified as queer (mostly bisexual, but not uniformly). Anyways, knowing that, and the general premise of this book, really pushed me over the edge into checking it out and starting to read immediately. And it was absolutely the right call. (Of note, I still plan to read Dear Martin, and even more so now that I’ve seen what a competent writer Stone is, but I’m very happy with my decision to pick this one up first.)

Side note: I’m a day late (I didn’t realize that June ended on a weekend, whoops) so here’s my book review post for the June Just One More Pa(i)ge Reading Challenge 2019, the prompt for which was, of course, to read a Pride-related book. 🙂

Odd One Out by Nic Stone 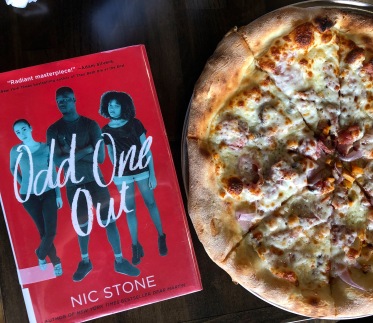 Odd One Out is the story of three friends. Two of them, Jupiter and Courtney (Coop), have been best friends since they were little. Like, it is one of the closest relationships I’ve ever read about. Rae is the new girl – she just moved to town and both Jupiter and Coop welcome her into their friendship (after a bit of a rough start with Coop, anyways). But Rae’s presence really starts to change the status quo between Jupiter and Coop. Jupiter likes girls. She’s always known that. Coop has a thing for Jupiter, though he knows it’s impossible (and his friends are doing everything they can to get him to move on). And Rae, well, Rae is struggling because it turns out she might have feelings for them both. Which looks like it’s going to really mess things up, because it seems like they both might have feelings for her right back. Tensions start to grow as all our characters work to try and figure out their own feelings (and sexuality).

Honestly, I thought this book was spectacular. The novel is told in three sections, one from each character’s POV, and every single one of them rang so genuine and authentic (though, if I had to guess, Jupiter is the character with whom Stone most closely aligns). I loved being able to see each of their thoughts, in turn, as they all worked through some of the most complicated intertwining emotions. It added great depth to the narrative, as well as providing the perfect amount of empathy in the reader for each of their predicaments and decisions. All three were so alive and real for me – it was really well executed writing. They all had a number of questionable teenage moments/comments/reactions, yet, at the same time, showed very realistic moments/comments/reactions of great maturity. The juxtaposition was, basically, spot on for high schoolers. I also loved some of the phenomenal normative writing around feminism, autonomy (and respect for each other’s agency), healthy masculinity, sexuality and just general multiculturalism. It all just…was. In fact, overall, this was one of the most inclusive and representative novels, both in terms of race and sexuality, that I’ve ever read. And none of it felt, in any way (at least to me – so take that with a grain of salt for my biases), like tokenism. That is cultural goals – I wish this fictional microcosm was more representative of reality.

Anyways, I know that there are many sexualities (i.e. polyamory) that aren’t addressed (and ending options that could have been taken re: those sexualities), but within the context of the novel and what’s realistic in a book of this length, I think the author did alright with it. And there are some comments made by characters that were/could have been hurtful…but that’s part of growing up/into yourself, learning boundaries, and more. I think it has to be ok to question or else how will you ever know? As long as the author handles the responses well, which Stone does for the most part. (I’m coming back to this a few weeks after reading and I definitely agree with some of the criticism over some characters comments/preferences that are pointedly judgmental; in particular, one female side character. And I agree with the criticism to the extent that her comments do lean towards bi-erasure. However…I also think it’s important to note that there are real people who think that way, and books are not meant to represent only the ideal, but also the reality, of the world around us. Encountering that type of comment is something many people have to deal with, and acknowledging that is important. The fact that Jupiter doesn’t question it more deeply could be hard to read, but is also representative of the place of internal struggle she is in at the time. I can’t say I loved it, but I also want to give Stone the benefit of the doubt for writing it that way on purpose. Just my two cents there.)

As far as the plot, this is a very relationship focused story…which should really be obvious, but I’ll state it anyways. There were a great many coming-of-age moments, both interpersonally and internally, that played out with quite a bit of drama, but in a realistic way. I loved that there was no holding back about how difficult some of these relationship decisions and sexual awakenings and questioning one’s queerness can be, both for the person themselves, and who they thought themselves to be, and in the way that one person’s “not knowing” can both purposefully and inadvertently hurt those closest to them. There are some really tender moments and some really cringe-worthy ones, which (in my experience) sums up high school dating in general, but all with a wonderful LGBTQ lens, which does nothing if not make everything at that age even more confusing. But in the end, the messages from the author about who it’s ok to love take centerstage, in an accepting, albeit complicated finale. Everyone gets hurt and everyone hurts someone else, but in the end, the important thing is to take the time to learn and accept and be proud of who you are and love who it feels right to love…and I can’t think of anything more real than that.

In a massive shift, I also want to reiterate how much I loved the way healthy masculinity was normed, especially within groups (i.e. – athletes) who are typically cast as the exact opposite. Coop’s respect for Jupiter, and his support of her choices and announcements, despite his own feelings for her, is so commendable. And I just loved his two friends, side characters Britain and Golly, who give advice and offer no strings attached support (for a number of characters) despite how easy to would be to alienate or take advantage. Finally, I love the ending. Even though in some ways it doesn’t seem as if much has actually happened or changed, and I definitely feel bad for some of the characters’ storylines, I also think it was honest, realistic and, as is often the case, reflects the fact that biggest internal changes are not externally visible.

In an interview with the author that I read, Stone mentions her goal with this book was to write the book she wished she had when she was a young adult, struggling to figure out her own sexuality and to answer the question of “who it’s ok to love.” And, if my opinion matters at all, I have to say that she crushed it. I wish I had this in high school, or college, and even, to be honest, I’d rather have found it now (at thirty) than not at all. It takes a lot of strength and courage to accept and fully be who you are. I read, in that same interview, that Stone came out to her husband only after getting married…and she commented on how much his support and acceptance of that meant to/did for her. I lived that exact same experience and I too would just like to take this moment to shout out a thank you to my partner for it. It’s made all the difference and, if anything, has just made my feelings for him stronger. Anyways, moving on from all the sappiness, I clearly recommend this book. Even if you’re way past high school, this is a book that will really make you feel good about loving who you love. And knowing that there are so many people willing to accept you for that is something that will just make you feel all fuzzy inside. It’s a positive, glass-half-full perspective of non-hetero sexuality and I am here for more books like this. Plus, it’s got a great dose of teen drama and cute quirks (like chapter titles named after crossword puzzle words and Queen songs, though I’m ignoring that whole Carnival Carl side-plot because it was super weird to me) that make these uplifting types of YA novels so much fun to read.

6 thoughts on “Odd One Out”