I’d heard a lot about this collection, both on bookstagram and listed in numerous online pop culture “top books” lists. The praise was wide and deep and, though I am not always one for shorts stories, convinced me fairly quickly that this was a collection I needed to experience.

Heads of the Colored People by Nafissa Thompson-Spires 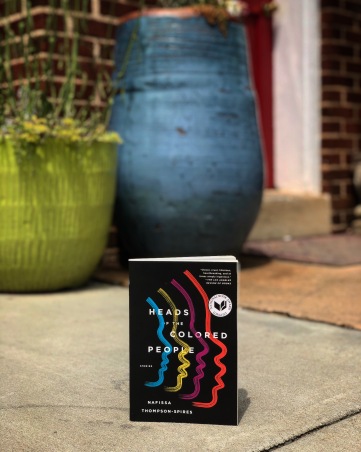 Basically, I just want to say that all the praise was absolutely deserved. I have no qualms or reservations in saying that this is the best collection of short stories I have ever read. Although, as with all collections, there are one or two stories that just didn’t work as well as the rest, I’ve never been as altogether affected or impressed. And the opening (and titular) piece is, to the best of my memory, now my favorite short story of all time. This collection is just hot…in all senses of the word. The stories and characters jump off the pages, the topics are timely and intelligently explored, the writing is superb, and the tone is just as dark, biting, caustically humorous and harshly satirical as promised. Bottom line – everyone should go read this. It’s entertaining and insightful and just so good. Do yourself a favor and pick this one up asap.

And, as I always do for collections like this, please enjoy my little blurbs/reactions to each individual piece:

Heads of the Colored People: Four Fancy Sketches, Two Chalk Outlines, and No Apology – Damn. And I mean like, I literally said that out loud after finishing this opening and titular short story. I seriously don’t know if I’ve ever read a better short story, and it’s only the first one. It starts with some truly humorous satire and was sprinkled with nerdy and 90s references that spoke to my soul and mislead the shit out of me (which is the point, no?). And then, as soon as the expectations were set, the narrative was flipped completely on its head, the hammer was dropped, and it felt like you’d been hit with nothing so much as Thor’s fist to your chest. I finished breathless and affected, perhaps even more so than after reading such lauded books on similar topics as THUG, and it was only 14 pages. Just 14 pages and the author’s sketches painted a clearer picture of misrepresentation and co-opted narrative than I’ve ever experienced before. So yea, damn what a start.

The Necessary Changes Have Been Made – This was a really insightful critique of the way masculinity is treated, the impossible rock and hard place of emasculation and hyper masculinity. But it’s also presented in a really funny way, a satirically humorous tale of passive-aggressive childish tactics in a professional workplace environment that I feel like truly speaks to the soul of anyone who has ever worked in close proximity to others…so basically everyone. And the ending made me snort out loud, with its amusing recognition of the futility and unnecessariness of these disagreements.

Belles Lettres – This was SO SNIPPY – a very similar humorous satire of modern middle-class parenting (along the lines of Where’d You Go, Bernadette?). The level of snark and fake politeness is strong…and the interaction devolves so fast. So entertaining. But the author brilliantly manages to weave in real messages about kids learning to act the way they see their parents acting, the over-involvement of parents in their children’s lives, the shallowness of petty issues and how quickly the focus changes (even though lots of damage is done in the meantime), and subtle messages about how institutional racism causes fissures within the black community. So smoothly harsh. Also, this story starts a mini 3-story series in the middle of the collection that builds on characters in a very interesting way, creating a much fuller character than one normally gets in just a short story.

The Body’s Defenses Against Itself – Great introspection/commentary on the effects of cumulative stress due to systemic racism in the US, as well as exploring the struggles of female issues that affect everyday life mentally/physically in an inescapable and very under-understood way (in this case, endometriosis). “…with my virginity established, she could treat me like a person instead of just a body.” “Sometimes the enemy who looks like you is but a preparation for the enemy who is you. The violence directed inside mitigates the violence that comes from outside. It prepares you, creates calluses, fill holes.”

Fatima, the Biloquist: A Transformation Study – What an amazing subtle exploration of black identity through the eyes of those who don’t “look and sound the part,” yet are treated like the part anyways. Beyond that fact that it’s wrong to start, this is an even more insightful look at the way race/racism changes the way people interact with/treat each other. Also, a great look at the insidiousness of mass acceptance of racism as the norm in the US.

The Subject of Consumption – This was a really weird one. Honestly, this is my least favorite so far.  The message I took away from it was that you can get away with things as a white parent that would get a child taken away from you as a black parent. And just in general, the things that are tolerated for white people are greater (even if it’s just not giving them weird looks in a grocery store) than for black people. I don’t know if that was supposed the be the message, but that’s what I got. And it’s true. And sad. And demonstrated to a terrifying extreme here. Also, it’s concerning what will get overlooked in order to make a good tv show (maybe not the point, but still, ugh).

Suicide, Watch – Oh damn this is some serious condemnation of social media and attention-neediness culture. Satirical and biting to an uncomfortable degree, but not altogether off base. Also, that ending though! My mouth actually dropped open. It was so darkly humorous, in the context of the story, but definite TW for suicidal thoughts/ideation. Dang this story hits hard. “…the bulk of her discontentment came from having very little about which to be discontented.”

Whisper to a Scream – Whoa. This was a beautifully subtle look into the disconnect between youth and adults today, and the particularly unique challenges to identity, self-knowledge/acceptance, and safety that come with coming of age in a digital age. It’s quietly harsh and heartbreaking. Also, I’d never heard of ASMR before – I love learning about new things from books! “Editing was the easiest part anyway; she worked best in short frames, quiet slivers, fragments. Everyone said so.”

Not Today, Marjorie – I struggled, from my own perspective, to connect with Marjorie. (I think that was due mainly to her religious leanings/explanations, and it’s my own thing.) I definitely respected the way the author showed how childhood trauma has lifelong affects, and the various ways people choose to deal with it, and what that means for their adult lives/relationships. It was sad, and I felt for Marjorie, truly. And it did a great job showing the inner processes of someone who outwardly pushes people away (and even scares people), which is such an important “put yourself in their shoes” empathy to create for such a difficult and nebulous thing as Marjorie’s negativity and “volatility.” But still, for some reason, I just felt more separate from this story than I did for many of the others.

This Todd – This one was creepy. A fetish for people with physical disabilities, and some kind of weird need to keep the focus on the fact that they are lacking and that our narrator is the one taking care of them, doing them a favor. It’s interesting to consider fetishes from this perspective, on disabilities, which I think universally would be looked down on, yet fetishes for black people, women in particular, are not seen in the same negative light. It’s calling attention to the issue in, as I said, a very creepy way that does not let the reader write it off as anything but wrong. It’s a nicely crafted message, and even worse in reality than it was icky to read here.

A Conversation About Bread – Wow. This one was amazing. Again, I liked the author’s nod back to the previous story with a repeat character (she uses this technique a few times throughout the collection). But really, this is a phenomenal philosophical exploration of ethnography and telling stories – how the one perspective the story is told from cannot possibly represent an entire group (even when being told by someone from within that group), but is often used to do so. It also explores how it can go so far wrong as to fetishize a person/group…again, building on the themes of the previous story. So smoothly critical in it’s questioning. “Didn’t every story provide a narrow representation at best and fetishize somebody at worst?”

Wash Clean the Bones – This story is everything about the particular tragedy of being black, being a black woman, being a mother of a black child, a mother of a black son, in today’s America. It’s horrifying in a way that should (does) inspire sympathy, empathy, anger and action. The collection ended with the same intensity it started with. To end this review where it began: damn, what a finish. “…sometimes you suffered more the longer you lived.” “That was her life, the residues you could wash out and the ones you couldn’t.”

One thought on “Heads of the Colored People”