I’m not sure what drew me to this book. Honestly, maybe it was just the cover (which is stunning). It could have been that it seemed like it might be on par with The Hate U Give, as far as topics and message, which I have loved seeing grow in the YA genre and definitely want to support more of. Or perhaps it was the fact that I found is available on at Book Outlet for a very reasonable price.  Regardless, it’s been sitting on my shelf for over a year and I’ve finally gotten around to it. Yay for me getting work done on backlist books this year so far! 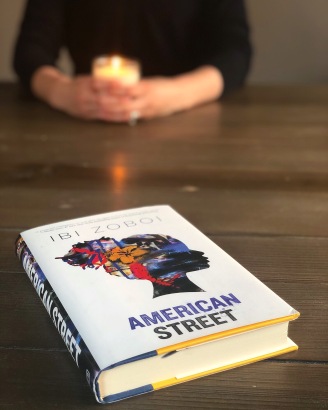 American Street focuses on the story of Fabiola, a young immigrant from Haiti who has just moved to Detroit. She traveled to the US with her mother, but is having to navigate all the cultural adjustments on her own, since her mother’s been detained by immigration in New Jersey. So, Fabiola moves in with her aunt and cousins and faces all the struggle of navigating a new country, new social rules, a new school, and maybe even a new romance, all on her own. Although after leaving Port-au-Prince Fabiola and her mother imagined a better life in the US, things are not quite everything she dreamed. And, when Fabiola finds herself facing an impossible decision, with only her spirit guides to advise her, she realizes that the freedom of the US often comes with terrible costs.

This was an incredibly gritty and authentic debut novel. One thing that I loved about American Street was the juxtaposition of inner-city United States and traditional Haitian culture/beliefs. The two lifestyles that Fabiola lives within and must find a way to compromise between, are so drastically different. There are, of course, a number of similarities between Detroit and Port-au-Prince that Fabiola discovers throughout her narration/experiences. Regardless, her ability to adjust to anything, especially without her mother (or anyone she knows at all) is impressive. I cannot even imagine how terrifying and lonely the transition(s) must have been for her. My one complaint about her as a character is that it takes her longer than I feel like it should for her to catch on to some of the “secrets” her cousins, and love interest (Kasim), are keeping. I felt like, based on her age and her general life experiences, she maybe should have realized what was actually happening (what the real situation was) sooner. I felt like I had it figured out, as a reader, ages before her. And she was not written as a slow/stupid character. The only thing I can say is that, with the cultural and language adjustments she was dealing with, along with a willingness (a need) to overlook signs because she didn’t want it to be true, it’s slightly more possible. Not a big complaint, just…full disclosure on my reactions.

The insight into Haitian culture was a fascinating part of this novel and I loved what I learned about how the belief system works, as well as more about the food and culture and reality of daily life, as Fabiola remembers it. I also really liked everything about this infusion of the “magical” into regular life, with the people Fabiola meets in Detroit taking on the personas of many lwa (Haitian Vodou spirits), with one exception. It comes at the end, during the denouement confrontation. I don’t know if it’s a coping mechanism (which I would understand, of course) or what, but just…the way it was written took some of the reality out of things in a way that, at least for me within the context of the rest of the story and the role of Vodou up until then, just went a little too far beyond belief. Anyways, I also enjoyed the way her relationships with her cousins and Kasim grew. There are, of course, some more positive and some more negative aspects of this growth, but the importance of family (and, as Fabiola learns, the “shit you do for fam”), is a strong thread binding them all together that is really inspiring, even when it leads to inadvisable decisions. Also, the dialogue among them (all the YA aged characters, to be honest, even the less prominent ones) felt quick and genuine. Since good dialogue is one of the things that absolutely gets me, as a reader, I highly recommend the book for that aspect. (Related note: I listened to this novel and the narrator is fantastic. Her Haitian accent really brought Fabiola’s narration to life and she read all the dialogue with wonderful and realistic tone and feeling.)

As far as the plot, the decisions Fabiola makes as she learns more about her cousins, their world, and the situations they are in, is really the crux of it. The first two thirds of the book are really her time spent learning and gathering information about her family, as well as fighting to find a way to adjust and get her mother out of detainment. To that end, the story is very much focused on the challenges of immigration and assimilation. In the final third, after praying to and following the advice of her spirit guides, Fabiola makes her big decisions and we really see the pace of the plot pick up. Secrets start to come out and impossible choices are made. And then, as is all too common, all too real, tragedy strikes. Although it was heartbreaking to read, I was glad that the story went there. As I said when I started, this was a truly gritty and authentic novel, and the characters’ decisions (true to all their personalities) that lead to that unfortunately inevitable ending, were a large part of that.

I think my internal comparison to THUG was actually reasonably accurate, considering I originally made the comparison with no real information about this book whatsoever. To the extent that it’s looking at the day-to-day lives and choices of YA-aged characters living in dangerous/low income areas of big cities, and it does not shy away from the difficult topics (and the unfair/impossible decisions facing the youth that live there) related to these lives, the two books have much in common. However, do not let the parallel in context fool you. The plots themselves are absolutely unique and the characters, who are completely distinct, make very different choices and/or face very different decisions, and the foci of the plots occur at two very different “slice of life” moments. I don’t want anyone to read this reflection and think that I’m saying all books about minorities living in inner cities are the same because absolutely nothing could be farther from the truth (both in general and in regards to my feelings about these two books in particular).  These are all important diverse voices and all deserve to be heard. Basically, the point I’m trying to make is that if, as a reader, you loved one of these books, I definitely recommend the other!