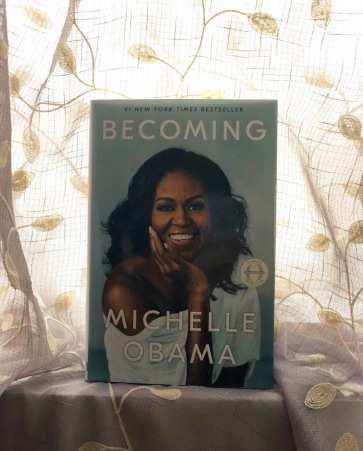 “If you don’t get out there and define yourself, you’ll be quickly and inaccurately defined by others.”

Basically, this is Michelle Obama’s story, told by Michelle Obama herself. Starting with her family, their background and her youth on the South Side of Chicago, she tells us about her life from start to…present day. This includes everything from her experiences all the way through school (from elementary to law), her work at a large law firm (and meeting Barack), their decisions and struggles regarding starting a family, balancing parenting and work, lots of career changes and choices, supporting Barack’s decisions to get into politics and, of course, her time as First Lady. If you love her (and really, how could you not?) this book has literally everything you could want to know about her.

There are so many reviews of this book floating around now and I know I’m on the late side of the post-publication surge of readers. But I still want to share all my thoughts because this reading experience was absolutely phenomenal. Michelle Obama is an American Hero. The first ever black First Lady, she blazed a trail unlike anything that’s ever been done before, under more scrutiny than has ever been put on a person in that position before, and she did it all with grace and poise and good-feeling. I cannot imagine having no one to look at/up to for a role as big as this one, yet having to do it all perfectly, the first time, anyways. It’s so beyond inspiring that I truly have no words to describe it. And I just love the way she presents the experience here. For all that what she’s lived is completely unique, she nevertheless manages to be entirely relatable throughout the whole of this book. She is open and honest about everything, from the lowest of lows to the highest of highs, without holding back on parts that might not have been as “pretty” while also not downplaying the parts that were extravagant or elite. More than anything though, it’s just fascinating to read the trajectory of Michelle Obama’s life, to see how (despite all the plans she made) things ended up so drastically different from what she ever expected her life to be (whether she wanted it or not). She was born and raised as “normally” as anyone could be, struggled with many of the same things women across our county face daily (from making ends meet to major career decisions to raising her daughters to be good people) and did it all while transiting from a life of (relative) obscurity to the largest stage in our country. Not to mention all the work she did before, in between and during to address the massive disparities in our country – from working to get minorities and youth into positions with voice and power to medical/educational outreach to under-served populations in Chicago and beyond. I can only hope that I can develop a level of heart, empathy and courage that allows me to make even a percentage of the difference she has in her life to date. It’s all just…wow.

I want to point out a couple of the sections/points that I enjoyed the most, just for fun. Towards the beginning, she talks a lot about learning to play the piano from her great-aunt. It’s a sweet story about her own childhood stubbornness that is quite endearing, all on its own. However, she also talks about her first recital, where she goes from playing the old piano with chipped keys in her aunt’s apartment to a shiny, fancy piano on a stage in an auditorium, and cannot find middle C with all the keys looking perfect and the same. She makes the most gorgeous metaphor about disparities and privilege at this point that is then carried throughout her experience in assimilating into primarily white culture, in college, for the first time. Although that metaphor was introduced in the first chapter, it stuck with me so strongly and is one of the small moments I remember most from the book. I also LOVED the commentary she had about her goal of becoming a lawyer versus actually practicing as a lawyer. I thought it was incredibly relatable when she talked about her disillusionment with the end result after all the work she put into getting there. There was such a wonderful recognition of feeling stuck in a position/job that you were pushed to achieve by societal/familial/personal expectations. This is something that, I think, is much more common than people are willing to admit and I love the message that you should not do something just because its what you think you should do. This is something I’m dealing/have dealt with in my life more than once, and I loved seeing that changing directions can still lead to success. I also truly appreciated the acknowledgement of the privilege she, and anyone with the luxuries of time/money to feel this way, have.

Another section that personally touched me was how open she was about the struggle she and Barack had in getting pregnant. Although I personally do not want to have kids, I worked in the field of childbirth/breastfeeding for years and the amount of shame and guilt involved in so many aspects of pregnancy and motherhood are heartbreaking…and even more so for how “secret” they are often kept. These issues, fertility and miscarriage, are so common and should absolutely be addressed openly, for there is no other way to, healthily, emotionally process them. And finally, though having lived through the Obama’s time in the White House personally and therefore having already known a lot of this, I loved hearing about everything Michelle did while Barack was in office. Her work in creating a more open and inviting White House culture, in addressing youth nutrition and physical activity, and in empowering women and girls to learn and lead…these are all the things that are closest to my heart. I cannot imagine a First Lady’s projects being more in line with my personal beliefs and passions and I just loved reading about everything she worked for and accomplished on that front.

I really don’t have any more to say other than that this woman (and this book) deserve every ounce of glowing praise she (and it) have earned. I have nothing but respect for Michelle Obama and that feeling has only grown over my time spent reading this memoir. Her voice is so completely authentic, her feelings so genuine, the writing so intimate, I almost feel like we are friends now, after finishing this book. (The fact that I listened to the audiobook, so she read the entire story of her life to me, probably played into that feeling quite a bit. Haha.) And really, she is so wonderful, I wish we actually were friends! If you are one of the few people that hasn’t read this yet…go do it!

So many accessible and inspiring passages throughout this memoir. Here’s a few:

“Failure is a feeling long before it’s an actual result. It’s vulnerability that breeds with self-doubt and then is escalated, often deliberately, by fear.”

“Now that I’m an adult, I realize that kids know at a very young age when they’re being devalued, when adults aren’t invested enough to help them learn. Their anger over it can manifest itself as unruliness. It’s hardly their fault. They aren’t “bad kids.” They’re just trying to survive bad circumstances.”

“It was one thing to get yourself out of a stuck place, I realized. It was another thing entirely to try and get the place itself unstuck.”

“Even if we didn’t know the context, we were instructed to remember that context existed. Everyone on earth, they’d tell us, was carrying around an unseen history, and that alone deserved some tolerance.”

“We were planting seeds of change, the fruit of which we might never see. We had to be patient.”

“Sameness breeds more sameness until you make a thoughtful effort to counteract it.”

“For every door that’s been opened to me, I’ve tried to open my door to others. And here is what I have to say, finally: Let’s invite one another in. Maybe then we can begin to fear less, to make fewer wrong assumptions, to let go of the biases and stereotypes that unnecessarily divide us. Maybe we can better embrace the ways we are the same. It’s not about being perfect. It’s not about where you get yourself in the end. There’s power in allowing yourself to be known and heard, in owning your unique story, in using your authentic voice. And there’s grace in being willing to know and hear others. This, for me, is how we become.”