Ok, the buzz around this book was off the charts at the end of last year. It seemed like it burst onto the scene out of nowhere and was inspiring some of the most hardcore love/hate reader reactions I have seen in a long time. There was no middle ground anywhere! When I realized it could fit the January theme (Mental Wellness Month) of my inaugural monthly reading challenge, I figured there was no time like to present to see what the fuss was about. To be clear, when I chose mental health as the first theme, I really was planning to read something a little more…serious…like a memoir (similar to Furiously Happy) or realistic contemporary fiction focused on this topic (similar to Everything Here is Beautiful). However, plans change and here we are. Ah well. Plus, that cover is intriguing on so many levels…it just completely overrode all my well-intentioned ideas.

My Year of Rest and Relaxation by Ottessa Moshfegh 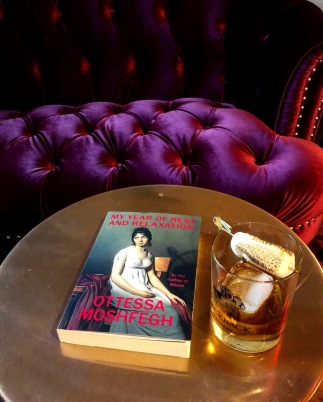 This book follows a year in the life of our unnamed narrator, a young, attractive, wealthy, female, WASP living in NYC in the late 1990s and early 2000s who, for a number of reasons, decides to spend an entire year in a drug-induced sleep stupor to “reset” her life. Quitting her job and removing herself from the public completely, with the exception of the two Egyptians at the bodega on the corner (where she gets her daily coffee) and her one “friend,” Reva, the narrator begins her year long journey. Aided and abetted, in regards to prescription provision, by what has to be the least competent psychiatrist ever, she begins her year of “rest and relaxation.”

The entire story seems written for maximum shock value. I totally recognize that that was the point, that the beauty of the satire is in the extremes portrayed, but damn…there were multiple times that I cringed while reading, sometimes for, but mostly because of, our narrator. Although at times I think that even the excessive satire, the purposeful facetiousness of the story, went too far and seemed slightly forced, it didn’t happen often enough for me to be disgusted past the point I was supposed to be disgusted. At a certain point, actually, the shocking enters into the absurd in a way that makes you forget any criticisms about how contrived the story is/might be. So, from that perspective, the writing was a success.

Relatedly, the momentum of the words was hard to avoid. I read this in three sittings, three large chunks. Each time, it took me about 5-10 pages to really get [back] into things, but then I found that it was much harder to stop reading than it ever had been to start. The entire experience was like being on a train that’s lost its breaks and speeds past (read: directly through) hurdle after hurdle on a downward sloping track and you know it will end in flames, more flames than its already created even) but you cannot get off. And it was completely enveloping. This is helped, I am sure, by the attention paid to the little details. Even with such dramatic and ridiculous larger plot points, the author still manages to include small things, like the random things our narrator notices when she enters a room, or parts of other people’s physical (or other) traits, that are just especially poignant or discerning in their exactness. This added a fascinating edge of reality into this otherwise sensational tale. It was a juxtaposition that made all the difference in my overall feelings for this book.

Moving past the writing and into the plot… As I’m sure you can imagine, the narrator’s year is, in fact, anything but restful and relaxing. I’ve mentioned this before, but to reiterate: I really love reading flawed, and even unlikable, characters, as they are often some of the most interesting. And let me tell you, the protagonist here (whose name I don’t think we ever learn – a small detail that I really liked) might actually be the least likable character I’ve ever read. So, while I struggled to truly feel empathy for her, even after we learn some more about her background, I did absolutely enjoy every minute I spent reading about her. She was fascinating and awful in the best way(s). Secondary to our narrator, we also had her “friend,” Reva, psychiatrist, Dr. Tuttle, art colleague, Ping Xi, and ex-kinda boyfriend, Trevor. And oh my goodness the unlikable character boat is so full in this book. Each of them is terrible in their own insecure, narcissistic, abusive and incompetent ways – and I loved them all for it. This was such a darkly riveting story, sometimes even slipping into shady hilarity because there is no other option. I particularly enjoyed the scenes with the psychiatrist…reading her little monologues on pseudoscience and her justifications for our narrator’s many prescriptions legit made me laugh a few times, in a weird, “that’s so not ok,” sort of way.

At the same time though, there is also a definite commentary on mental illness, mental health, and the way it’s acknowledged and treated in this country. Most obvious are the misconceptions that exist around taking medication to treat and stabilize, from both angles: the benefits and the disturbing side-effects. But there’s also quite a bit of time spent developing the narrator’s background story, which provides commentary on the affect seeing one’s parents choose to use substances can have on a child’s choice to do so (showing the creation of a level of acceptability around it and simultaneously calling out the “do and I say not as I do” mentality). There’s also exploration on the role grief can and often does play if the ability to process it effectively is not present, particularly in connection with the resulting loss/lack of real human contact, both physical and emotional. Plus, we see a lot in regards to the way self-esteem, and how you understand the way others see you, plays into how you interact with others, how you think you deserve to be treated, and the manifestation of what that makes your life/relationships look like. This, obviously, often also causes mental strain. So, basically, very legitimate mental health concerns are addressed throughout the novel. It’s just done in a unique and polarizing way.

The one thing I’m truly undecided on, as far as my pro-/con feelings about this book, is the ending. The very last chapter addresses a particularly sensitive moment in US history in a way that, while very in line with the overall irreverence of the story, confused me with its presence. It’s not necessarily that I was upset about the way it was handled, but more that I wasn’t sure why it was included in the first place. I feel like it’s such a pivotal moment in recent history that it draws the story’s shock and awe unnecessarily far from the character we’ve been following so closely. I don’t hate the message the author writes into it, and I actually really like how/why our narrator is obsessed with it (in fact, it fits her character perfectly), but…was there no other way to end the book that would better keep the reactionary focus on our protagonist? It just happens so quickly, the outside world entering our perspective for the first time so suddenly, and essentially just on the last page of the book…I just felt a little unmoored by it. If you’ve read this – what are your thoughts on the ending?

This novel is a character study unlike anything I have ever read before. It’s biting and crude and cringe-worthy and mesmerizing, with the occasional insight that is so spot on (and is especially affecting because you aren’t ever expecting it when it hits you). It’s chock full of some amazing-to-read unlikable characters and highlights an important issue, mental health, in the exact way a satire should. I think, on the love/hate scale readers seem to have adopted for their reactions to this book, I’m leaning towards love.

Enjoy a couple of my favorite quotes/passages:

“It was to easy to let things come easy and go nowhere.”

“This was how I knew the sleep was having an effect: I was growing less and less attached to life. If I kept going, I thought, I’d disappear completely, them reappear in some new form. This was my hope. This was the dream.”

“Have a trash chute was one of my favorite things about my building. It made me feel important, like I was participating in the world. My trash mixed with the trash of others. The things I touched touched things that other people had touched. I was contributing. I was connecting.” (This thought – more in context than on its own, but you’ll have to read the book to ger that full feeling – struck me with surprising heaviness and profundity. One of those insightful moments that really took my breath away with it’s unexpectedness.)

“Rejection, I have found, can be the only antidote to delusion.”

“And that was exactly what I wanted – my emotions passing like headlights that shine softly though a window, sweep past me, illuminate something vaguely familiar, then fade and leave me in the dark again.”

Did YOU participate in the Just One More Pa(i)ge Reading Challenge this month? If so, what did you read? And what did you think of it?!

12 thoughts on “My Year of Rest and Relaxation”