I have no idea how I heard of this book or what it was that made me want to read it. What I can tell you though, is that it was one of the books I bought at Powell’s while visiting Portland last summer. So, there’s that. This might be my shortest intro of all time. Haha.

The Argonauts by Maggie Nelson 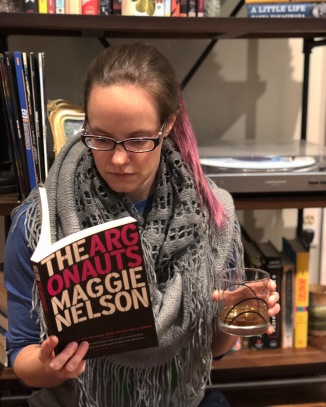 The Arognauts is unlike anything I have ever read before. That’s not to say other books like this do not exist, but that I have not personally read or sought them out. It’s a memoir, sure, but it’s also a social critique and philosophical exploration of gender, motherhood, desire and more. And it’s all written/presented as a sort of poetic journal type piece: short sections of thought that jump around a little as they follow an overall meandering path to the “finish,” with no chapter or section breaks at all. It’s sort of like a published collection of thought bursts, like ones you would write in a small notebook carried in your pocket/purse, there for the express purpose of gathering these thoughts at any time/place, before you forget them – just in this case, all the bursts center around the same theme(s). In any case, Nelson explores, throughout this short book, her relationship with her gender-fluid partner, the challenges they have faced both internally and externally, as well as their journey to get pregnant, and her own efforts to create a stable family life to a step-child and a biological child within the confines of a culture that often doesn’t make it easy/simple to act as a family if you do not fit certain, specific, parameters. She does this both in reflections on her own thoughts and (re)actions, as well as through the lens of various philosophical strictures.

The language of this book was completely fascinating to me. At times, it was so esoteric that I had to reread (or re-listen, in my case) to certain sections multiple times to understand what was being said (and even then I can’t say with confidence that I “got” it all). And at other times, the language was so explicit and candid that I was almost shocked by the simplistic brutality of it. I’m sure there’s a deep meaning and/or reason for this, but for me it was a stark contrast that I didn’t always understand the “why” of. However, even with that, I can’t say that I didn’t like it. I was kind of into the sharpness of it. I felt like it kept me on my toes as a reader.

As far as the actual content, Nelson tackles a number of incredibly complex and difficult issues. And she does it all in a way that is so concise, I can’t help but be impressed that she got in all into this short of a book in such a competent way. I think my favorite pieces were related to her exploration of the need for a binary system of understanding. She does this primarily in terms of gender and sexuality, questioning why there needs to be a clear dual-definition set up, why society still needs a person to claim either female or male, totally gay or totally straight, and why there is not wider acceptance of a grey area or blurred edges approach to these labels. But she also explores this concept in regards to more radical ideas as well, talking through how some LGBTQ activists/philosophies may even prefer to stay marginalized because more acceptance of their way of life into the “mainstream” disallows them from staying “revolutionary” in any way. Again, more one or the other labels that should be able to be applied with a wider lens and a greater nuance. It’s honestly fascinating. There was also quite a bit of similar delving into concepts and philosophies regarding motherhood and family, and what those terms mean. I won’t go into quite as much detail here for two reasons. One, because I think from the above descriptions/context, you can sort of understand the type of writing already. And at this point either you’re into it and plan to pick this book up yourself…or not. Two, because of the main topics covered in this piece, this was the part I was least into. I have no personal experience with motherhood or raising children, nor do I plan to, so while I respect the experiences and am reasonably interested in the insight of others on this topic, it’s not something I tend to seek out or be overly intellectually invested in. Just know, it’s included too.

I learned a ridiculous amount from this short piece. It’s philosophical, cerebral, and insightful. I was truly interested in most of the topics and I appreciate Nelson’s intelligence and writing. But I have to say that it was also super mentally taxing. I was glad I had both an audiobook (read by Nelson herself) and a physical copy – I needed both to keep up. It’s not a memoir that I would recommend to everyone, and I would also caution significant mental preparation before starting. But as I said, it was eye-opening, simultaneously tender and harsh, and very educational. If you have ever questioned, or had questions about, gender/gender-fluidity/false gender binaries, or if you are interested in philosophical love and motherhood, then this is a phenomenal place to start.

It should come as no surprise, after all the talk about how profound the language is, that I would have lots of passages that popped out at me while reading:

“A day or two after my love pronouncement, now feral with vulnerability, I sent you the passage from Roland Barthes by Roland Barthes in which Barthes describes how the subject who utters the phrase “I love you” is like “the Argonaut renewing his ship during its voyage without changing its name.” Just as the Argo’s parts may be replaced over time but the boat is still called the Argo, whenever the lover utters the phrase “I love you,” its meaning must be renewed by each use, as “the very task of love and of language is to give to one and the same phrase inflections which will be forever new.”

“Words change depending on who speaks them.” (Possibly paraphrased – I did a voice note while driving/listening, but the point is that the “how” you say something changes the “what” that you say.)

“There’s something truly strange about living in a historical moment in which the conservative anxiety and despair about queers bringing down civilization and its institutions (marriage, most notably) is met by the anxiety and despair so many queers feel about the failure or incapacity of queerness to bring down civilization and its institutions.”

“The freedom to be happy restricts human freedom if you are not free to be not happy.” – Sara Ahmed

“…any bodily experience can be made new and strange, that nothing we do in this life need have a lid crammed on it, that no one set of practices or relations has the monopoly on the so-called radical, or the so-called normative.”

“If something needs to be willfully erased in order to get somewhere, there is usually a problem.” (Also possible paraphrased, dang driving and listening, but again, the point hit home for me and I wanted to make sure it got noted.)

“[..] a culture committed to bleeding the humanities to death, along with any other labors of love that don’t serve the god of capital: the spectacle of someone who likes her pointless, perverse work and gets paid – even paid well – for it.”

“The peace is not total, but in the face of a suffocating anxiety, a measure of peace is no small thing.”

“It feels big but I feel big enough.”

2 thoughts on “The Argonauts”