Everyone that I had seen that had read this book gave it good reviews, so it had been on my radar. And I was in the library looking for a “light” end of year read when I spotted this on the shelves and the spine popped out at me (love that blush and rose gold combo). That’s pretty much all I have to say for background on this one. Not a very exciting intro. But sometimes that’s how picking up a book goes. 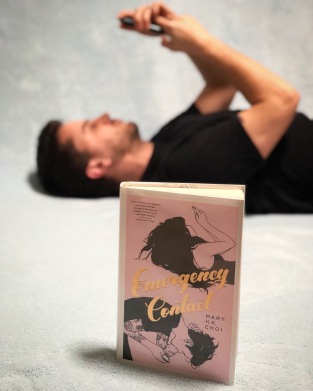 “I know I love someone when I can’t remember what they look like in any real way. I can never seem to recall whether they’re handsome or ugly or if other people think they’re cute. All I know is that when I’m not with them and I think about them, where their face should be is this big cloud of good feelings and affection. […] It’s more this undeniable mood. It’s this warm, familiar and exciting feeling where you miss them already when you’re with them.”

The book is told in alternating points of view. The first, Penny, has just graduated from high school and is heading into her first year of college at UT (which isn’t far from home, for her). The other is Sam, a 21-year-old barista living in Austen and…a little lost. Penny is working through many of the normal “new to college things,” like breaking up with her boyfriend back home, struggling to live up to her (favorite) professor’s expectations of her writing, making new (any) friends, etc. Sam is dealing with an ex-girlfriend that he just cannot get over, financial issues, and what could easily turn into an alcohol addiction if he isn’t super careful. When they awkwardly meet, and end up exchanging numbers, they become text buddies like you’ve never seen before. Able to be weird together and share some of their deeper concerns (like artistic goals and difficult maternal relationships), the virtual relationship provides something deeply necessary to each of them. But, as things must, it escalates. And both of them are left wondering…can their compatibility carry over to the real world?

I fell right into this cute, fast, quirky romance for the digital age. From the very first page, the writing is smart and snarky, moving at a lightning speed that only gets better, and faster, and builds so smoothly, when Penny and Sam start texting. It’s a style that may not be for everyone (because if there is a back-and-forth you don’t totally get, there’s never a point where Choi stops and explains, so you have to be comfortable just moving on and understanding that it was cute and inside joke-y and that’s the main takeaway). But personally, I thought it was bomb dot com. It’s also the perfect way to develop a relationship like this – one that starts in a lighthearted and low-pressure way that nonetheless moves them inexorably into a real, moving intimacy. Spot on for our current YA/NA age bracket and so well done.

Outside of their text communications, Penny and Sam are just a really cute relationship. Both nervous and unsure and not great at positive interpersonal connections, it’s adorably painful to watch and read. But despite that, it still unfolds in a safe and healthy way, which is a type of relationship I can definitely get behind. Also, there are a few poignant moments that really spoke to me. I loved that, though one of their problems (their relationships with their mothers) has one that is clearly objectively “worse,” their interactions do a great job of evenly recognizing and sympathizing, without any real comparisons or attempts to one up the other with their issues. Also, no matter what intermediate/other issues arise, they are (at least outwardly and as much as possible) non-judgmentally supportive. I just can’t love that more. And the big one, for me, is when Penny admits something to Sam that she isn’t sure should “count,” as far as making her feel the way she does about it. And his response – an unequivocal but not overbearing recognition that it absolutely counts – melted my heart. Last, and a smaller thing, is that I just love that the things both Sam and Penny are most self-conscious about, are the exact things that they secretly like most about each other. Swoon.

The best relationships are the ones that just click, often in a way that outsiders don’t always “get.” I felt like Choi crushed it getting that across in a way that focused in on the exclusivity of Sam and Penny’s relationship (really making you feel it) while simultaneously not leaving the reader so far “out” that they felt removed or un-invested. This borderline YA/NA novel (which I’m here for, as more of an NA-aged person) was everything I was hoping for. It spoke deeply to my nerdy, punny, artsy, eccentric heart. And, as my second Swoon Reads novel that was super impressive and heartwarming, I have to say I’ll definitely be looking into more books/recommendations from them in the future! (As a reminder, the first that I loved was Queens of Geek – and we all know how much of an impact that book had on me…). Anyways, this is a great one!