I had seen this one around a little when it came out a couple years ago. And it looked cute, but it just wasn’t one I had at the top of my TBR…or to be honest, on it at all. (I just wasn’t all that drawn to the story – beauty pageants are not something that overly interest me…unless it’s a re-watch of Miss Congeniality.) But as I was looking through Netflix the other day, I saw that they’d adapted it into a movie. And the movie had JENNIFER ANISTON in it. Now, to each their own, but I personally LOVE her. So pretty much that did it: I was going to watch the movie. (Plus, the Netflix adaptation of To All the Boys I’ve Loved Before was really well done, so I’m inclined to give them the benefit of the doubt with YA adaptations right now.) And if I was going to watch it, we all know I had to read it first. 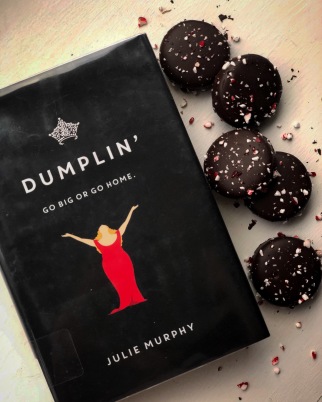 “…no matter who you are, there will always be someone prettier or smarter or thinner. Perfection is nothing more than a phantom shadow we’re all chasing.”

This is the story of Willowdean Dickson, a self-proclaimed fat girl living in small town Texas. She always been at home in her own skin, but between her aunt’s (who she was very close to) recent death and a big crush on her super-hot coworker (that, to her surprise, seems to be returned), things aren’t as clear as they have always been. When Willowdean makes a surprising decision, to enter the Miss Teen Blue Bonnet Pageant that her mother won years ago and now pretty much runs. It’s a really big deal in this small-town setting, but Willowdean does not look anything like the majority of the contestants.  And when her entry causes a whole group of “unusual suspects” to enter, things get interesting.

I was hesitant for a few reasons going in, but mainly because, as I’ve mentioned, beauty pageants are super not my thing (other than Miss Congeniality, which is one of the best movies of all time) and I was worried that I just wouldn’t be that into reading about one. Also, Dolly Parton’s music clearly plays a big role…and she’s not really a favorite of mine either. But I was pleasantly surprised to learn that, while the pageant is central to the plot, it’s not at all central to the development of the characters themselves, and really acts as more of a vehicle than anything else. Willowdean herself was a lovely and believable protagonist, neither totally ok with herself nor paralyzed by who she is/is not. I really enjoyed the realistic depth of the issues with her friends, with few clear right vs wrong lines, while still being handled in a reasonably high school-ish way. Also, the way she handled decisions/indecision about boys, as well as interactions/confrontations with her mom, were also understandable considering her age. And in general, the way the youth interacted with each other was just nicely well rounded – there were your normal jerks (there always are) but there were definitely also sensitive characters, as well as those that are taken the wrong way just because the face they present is the only one they know how to present.

As I mentioned, the plot itself is not as much about the pageant as I had expected…and I liked that. It became a great public manifestation of Willowdean and her fellow “unusual suspects’” daily struggles with acceptance (both from others and of themselves). The way this represented and paralleled their inner turmoil and “coming-of-age” situations was nicely done. But at the same time, we get to dive deeper into each of the character’s lives/histories outside of the pageant than I was expecting…and that truly does make up the bulk of the book. With that, the message the book carries, about body positivity in general, as well as stepping up/being yourself, does take center stage. I was not as into the romances in this story…to be honest there wasn’t really a single one that felt like it had real chemistry and wasn’t just there because there needed to be one. It’s unfortunate, because I do agree, for the most part, that a couple of the relationships needed to be included, but they way they were written was low point of the story for me. On the other hand, the family- and friend-based relationships, as well as even some of the newer or more random acquaintances, felt much more real.

Altogether, this was a sweet, fast read. It addresses things that I don’t often see in YA books, or books in general: physical characteristics that are not considered mainstream attractive. The writing was smooth and capable, but not the focal point, so I was able to fly through the book in just a couple hours. Featuring a mother-daughter relationship that is struggling but has hope, boy problems, drag queens, Dolly Parton music, rural charm, and with a great group of “outcasts” at its center, this book carries an important message about body positivity, taking chances outside of your comfort zone and owning who you are. It’s cute and affirming and encouraging and definitely worth my time reading it pre-movie.

And, having now also seen the Netflix adaptation… Same as with TATBILB, I thought the movie was even better than the book! Netflix did a fantastic job and my love for Jennifer Aniston is reaffirmed. I laughed, I cried, and overall I felt way more connected to the characters in the movie than I did in the book. Woohoo!