I have a strange interest in reading about manipulative/obsessive f/f friendships. It’s not something I seek out overly often, because they can be very draining to read, but I am really fascinated by them. So, when one comes across my radar, I add it to my list. One of my favorites in this genre is The Other Typist by Suzanne Rindell. I read it years before starting a book review blog, so the only record I have is a short paragraph review on Goodreads – but it is a glowing review. In fact, I used the phrase “deliciously toxic” to describe the women’s relationship that is at the center of the novel, and I’d like to pat past-me on the back for that wonderfully evocative description. In any case, it’s a weird sub-genre that I really enjoy, so when I was in the mood for it recently, I turned to this 2018 release that seemed like it was right along those lines. 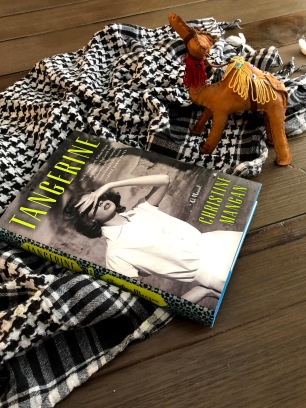 The relationship at the center of this novel is that of Alice Shipley and Lucy Mason. They meet at Bennington College in Vermont and soon become thick as thieves, but an accident towards the ends of their years there causes a rift and falling out. Over a year later, Alice is living in Tangier with her new husband when Lucy shows up, unexpectedly and unannounced, at her door. Although Alice has struggled to recover from that night at Bennington, and since then has not really adjusted to life in Morocco, she is still not altogether relieved to see Lucy’s familiar face. For a short time, things fall into a routine, with Lucy working to bring Alice out of her shell. But as that happens, Alice also starts to remember some details about their time in Vermont that make her uncomfortable. And when her husband goes missing, Alice begins to question not only her old friend, but her own mind.

From the very beginning, there is a foreboding and menacing feel to this story. Even at the beginning when there is no reason for the reader to think anything is wrong, there is an undercurrent of threat in the writing. I listened to this as an audiobook and the character’s narrators lean into this strongly. As the narration switches back and forth between Alice and Lucy’s POVs, so too do the narrators change. Alice’s voice was timid and questioning from the start, while Lucy’s was ominous and mastermind-y. There is no hiding who is who in this unhealthily symbiotic relationship. I am not sure if this would have come through quite as strongly if I had read instead of listened, but I think it would have. Mainly, this is due to the fact that the emphasis on creating a “dark” atmosphere was perhaps a little too manufactured. To that point, it was not just the voices themselves, but the written descriptions and exposition that played into the [partially] contrived suspenseful atmosphere. It seemed like the author forced the foreshadowing/past-shadowing just a little too much; like she tried too hard to infuse a negative influence-ing aura on Tangier. (And, really, on Alice’s husband. I mean, he’s definitely, in no way, a stand-up guy, but I felt like Mangan made him out to be the “big bad” with minimal motivation. Though, I guess to be fair, most of that inference came during Lucy’s sections, and you can see through her owns words/thoughts, as the book goes, how bias and unreliable her opinions are.) Regardless, even with it being a pushed a little too obviously, the book does have the general heavy feeling that every “good” toxic relationship story has.

As far as the actual relationship between Lucy and Alice. I did love the elements there. It starts in a legitimate way, not necessarily with ulterior motives. But it develops into something more through the combination of Alice’s childhood traumas and resulting mental “weaknesses” and Lucy’s needs and projection of “fixing” her perceived past inadequacies by pouring herself and her efforts into this relationship with Alice. I really enjoyed reading the background stories of each woman and analyzing how those experiences led them both to this point with each other. And as we learn the many ways that Lucy has controlled and manipulated Alice over the years, and the way that she has justified it to herself, it really creates a mesmerizing psychological study. Alongside that, the unfolding of events in real time, what actually happened to John and how far Lucy will go to “protect” Alice, and then to protect herself (regardless of Alice), is presented with finely handled details. In fact, the small details are one of the best parts of this novel – with little things from the distant past up to the very present popping back up, and being used by Lucy, to play mind games with Alice. The way these are consistently woven into the plot is executed with skill.

Although the entirety of the plot is not as subtle or delicately developed as I would have wished (when you fore/past-shadow that hard, even horrific acts don’t seem as bad because they are almost too expected), the eerie and obsessive nature of Alice and Lucy’s relationship was the general type of thing I was looking for. While I definitely liked The Other Typist better, since at the end of that one you are truly left unsure of what happened and what was real (while having both women narrate this one leaves no doubt as to who the real “culprit” is), it’s still a deeply unsettling story. The way one women is able to completely dismantle the mind of the other, and knowingly does so, is terrifying and in line with the thrill I was looking for. A solid, if not spectacular, tale of a creepily manipulative relationship.