I’ve had this one on my TBR for a few months now, having heard multiple times how good it is. And when I saw it on Book Outlet last time I was perusing the site (I won’t say how often I do that…gotta keep my book-buying complex on the DL as much as possible, haha) I went for it. A few weekends ago, I was participating in the @25infive readathon and, since I had a lot of driving to do for work, I went ahead and got the audiobook as well. Excitingly, it was read by Khan-Cullors herself, which I know I’ve mentioned before is one of my favorite things about listening to memoir-type nonfiction pieces. Anyways, I flew through this one.

when they call you a terrorist: a black lives matter memoir 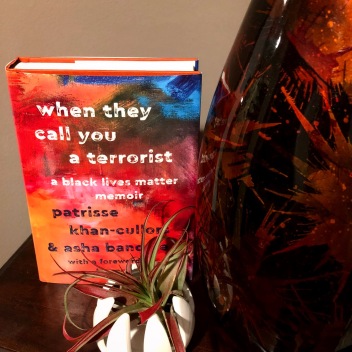 “What is the impact of not being valued? How do you measure the loss of what a human being does not receive?”

Patrisse Khan-Cullors is one of three, along with Opal Tometi and Alicia Garza, who founded the #blacklivesmatter movement, when Trayvon Martin’s murderer walking free become a proverbial final straw for them. In this memoir, she takes us back to her childhood and youth around L.A. From an incredibly, tragically, young age, she began to experience the persecution and institutionalized racism the US inflicts upon the black and brown people that live here, particularly from law enforcement and the “justice” system. In her neighborhood, within her family, and personally, she lives a myriad of incidents that illustrate how pervasive, restrictive and violent the reality is. We see how this interacts with her own intersectional marginalization, being black, female and queer, as well as her brother’s, as a young, black man with a mental illness. And over the course of the book, we watch as she becomes an organizer, an activist and a major civil rights leader for the current age.

It’s been days since I finished this book and I am still working to process my reactions in a way that allows me to accurately reflect and share them in this written review. These are such sensitive topics, and such unbelievably important ones, that I want to make sure I do them justice. In addition, as an incredibly privileged white woman, I also want to make sure that I am as respectful and introspectively thorough as I can be. And to be perfectly honest, I am very nervous about making sure I do that right.  All that being said, here we go.

First, let me just say that this book was absolutely phenomenal. An affecting, powerful, inspiring, eye-opening and heartbreaking memoir. Even with all that I have read, studied, asked, and learned, there is nothing that comes as close to understanding as hearing from Khan-Cullors, and others like her, from their own hearts and lives. The racial profiling, police brutality, systemic racism of the justice system, and more that Khan-Cullors faced even as a child, and that she (we) still see(s) people of all ages, even young children, facing today, belies believing. In fact, while reading, this is the type of story that one wants to be a dystopian fiction. Or, barring that, one wants to believe that, at the very least, her lived experience is an extreme example. But it is not. Not even close. This is a reality for untold numbers of people in our country and it continues to be swept under the rug by those in positions of power. And the fact that this is not necessarily a “special” story, but rather one that is similarly experienced by so many (which she gives many examples of, throughout the narrative)…that is where the true terror and horror and impact and sadness, where the heart of Khan-Cullors’ message, lives. That is where the importance of sharing her story has its root.

There has been quite a bit of negative backlash and counter-protest to the BLM movement. Big media, the voice of the majority, has proclaimed the intrinsic violence of the movement and of the people involved. But with this book, Khan-Cullors gives profound insight into the truth of the matter – that it was founded to protect some of the most vulnerable from the violence that is enacted against them every day. It is born of a love and a hope that their futures can be safer and full of opportunity for the same happiness and success that less vulnerable populations take for granted. And the way she takes the accusation of terrorism, thrown at many both prior to and in conjunction with BLM, and illustrates the absurdity of the charge being leveled against those who are in fact not terrorists, but have been victims of terrorism themselves, is clearly and deeply rendered.

If you have never thought about these things before, or if you have ever been of the opinion that #alllivesmatter (or #bluelivesmatter) is a more important rallying cry than #blacklivesmatter, than I beg you to read this book. It makes it so clear that the issue is not that those other lives don’t matter, but that for so long it has been acted on that black lives do not, and this movement is meant to call attention specifically to that. It is enlightening, moving and at times, so appalling that it’s difficult to read. But for those of us who have never had to live those types of moments, it’s an absolutely necessary, required even, difficulty. Because just imagine…if it’s that hard to read, how much more impossible is it to live? And then, when you are done, I hope your thoughts have been reframed. Khan-Cullors presents so many important ideas, poses so many necessary questions, examines the true motivations behind so many policies/laws and dares the reader to dream of and work towards a better, more equal, future. And I challenge, for us all, myself included, that we find ways to share the message and take the action that this memoir calls for and desperately requires.

I listened to the audiobook, which was wonderful, but unfortunately did not allow me to mark pages of the quotes and passages that struck hardest (of which there were a ridiculous number). So, I have gathered here the ones that I was able to find going back through the physical book. But I encourage you to read it for yourself, because there are so many more that deserve to be shared:

“The binary that makes a person either good or bad is a dangerously false one for the widest majority of people. I am beginning to see that more than a single truth can live at the same time and in the same person.”

“We agree there is something that happens inside of a person, a people, a community when you think you will not live, that the people around you will not live. We talk about how you develop an attitude, one that dismisses hope, that discards dreams.”

“These pieces of family history and harm that never heal, that pass on generation to generation.”

“In California there are more than 4,800 barriers to re-entry, from jobs, housing and food bans, to school financial aid bans and the list goes on. You can have a two-year sentence but it doesn’t mean you’re not doing life.”

“When I speak at universities, in colleges, I share these statistics. I tell them that even as we are labeled criminal, we are actually the victims of crime. And I tell them there are no stats to track collateral deaths, the ones that unfold over months and years spent in mourning and grief: the depression that becomes addiction to alcohol that becomes cirrhosis; or else addiction to food that becomes diabetes that becomes a stroke . Slow deaths. Undocumented deaths. Deaths with a common root: the hatred that tells a person daily that their life and the life of those they love ain’t worth shit, a truth made ever more real when the people who harm you are never held accountable.”

11 thoughts on “when they call you a terrorist: a black lives matter memoir”