I love reading because it opens up so much of the world that is unknown. Like, there is just so much out there to learn about. I am drawn to books that will give me insight into something I didn’t previously know about. And even if, like in this case, the story itself is told in a more fictional way, I am still introduced to something I had no/less knowledge of. Then, after reading books like one, I always spend time researching the “reality” of the events and history. Everyone always says that reading helps you gain perspective and empathy…and this, right here, is how it happens.

She Would Be King by Wayétu Moore 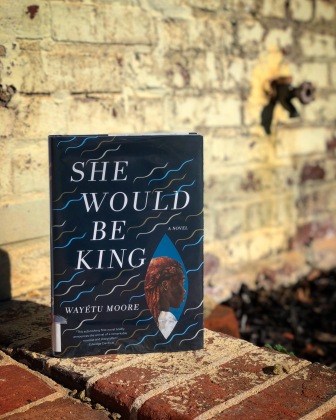 She Would Be King is a magical realism retelling of the story of the founding of Liberia. The books starts with us being introduced to our three protagonists. Gbessa is exiled from her village, Lai, after being born cursed. June Dey flees his life as a slave on a plantation in Virginia after a violent confrontation. Norman Aragon leaves his country of birth, Jamaica, to follow his mother’s dreams. When they all find themselves together in West Africa, they start to realize each has a special gift that puts them in position to be able to help the vulnerable in their ancestral lands. And Gbessa in particular, after being taken in by African-American settlers in Monrovia, finds that she may be the only one who can unite the newcomers and the indigenous tribes.

“And without a spirit, you cannot feel. You react, but the longer you exist in a world without your spirit, the less you feel. And feeling, no matter how low the emotion, is a gift. But in that place we stopped feeling when our spirits were killed. Laughter was a reaction. Tears were a reaction. Those screams were a reaction. But the source of them – the mother of joy, of sadness, or terror – was a ghost like me.”

After reading this book, and hearing a few facts that sounded familiar, I can say that I was likely introduced to this story, in a nonfictional context, in a history class at some point. But even with those vaguely recognizable pieces of information, this book taught me so much more than I had ever previously learned. Plus, it taught it to me from a perspective that I am positive is not included in history classes. What I’m sure I learned is that the American Colonization Society “helped” create a space in Africa where “free” African-Americans could create their own society. What I’m sure was left out is how this was motivated not by altruism, but by the US’ interest in getting rid of the people that they felt were competing with whites to the economic and societal detriment of the country. Also, I’m sure it wasn’t mentioned that the fatality rate for these A-A “settlers” was so high or that they continued to be ruled by white “governors,” among other things. I also was fascinated by the exploration of the societal structure in Monrovia and how it so closely imitated the culture of the US, because that is all the settlers knew. This, of course, led to familiar hierarchical relations with the local tribes whose land was being “settled” and who ended up working as servants and in other menial jobs. Plus, with the language and tradition barriers between all the indigenous tribes and the new settlers, and the ever-present threat of white invasions, there were so many layers of complicated interactions. Needless to say, in a purely educational way, this was an incredibly illuminating read for me.

As for the story itself, I have to be honest, it was a slow start for me. It took me almost two weeks to read the first half to two thirds of the book. I struggled to get into the swing of the story. The first three or four sections, the ones that introduce us to the protagonists, are almost like completely different stories. There are no overlapping characters, locations, etc. and it seemed like a very fragmented start, especially because I thought I was reading about the founding of Liberia and none of the settings for this first hundred or so pages was even remotely Liberia. I just couldn’t figure out the connections between anything that was happening and couldn’t imagine how they’d all end up together and where they needed to be. However, once their stories did finally come together, and Gbessa made it to Monrovia, things started moving much faster. I was able to find the flow and the pages started turning faster. After taking weeks to get to that point, I finished the last third in about two days. And the time spent setting everything up started to make more sense. In fact, knowing the origins of each character, and from where their individual powers were born, really helped me understand how they reacted to the situations they found themselves in. It also clarified the different decisions they made, and the way they made them, in regards to who to protect and when to do so. In most cases, but particularly Gbessa’s, this was really quite devastating to read. But the exploration of the effects of their individually tragic and oppressed backgrounds was important and thoroughly represented. Many times the tragedies in this book were overwhelming, but in a balanced and authentic way that, again, for me, was enlightening and educational. I do wish that the last third, the part that directly addressed Liberia and its origins, included more detail and elaboration, on par with the backgrounds of Gbessa, Norman and June Dey that we were given in the beginning. It seemed just a little rushed in comparison. However, that likely would have made this more of a plot-based historical fiction piece than a character-based magical realism piece. And to that end, I did enjoy the folklore-like style that she used – it was the perfect matched for that stylistic decision. So in the end, I respect her creative decisions.

I have some other random thoughts that don’t really go anywhere, so I’ll pop them all in here. First, I just loved the way that Moore shows the fate and circumstances of Africans and African descendants (African-Americans) from such a variety of backgrounds, locations, traditions, experiences, ideals, etc. From the US to Jamaica to West Africa, from escaped slaves to “freeborn,” from indigenous to settler, from local tradition to Christianity, it was wonderfully encompassing. Also, the way that Moore takes the oft-used “magical negro” trope and completely rewrites it as the central story, as real power, as the hero(ine), is something really special. Last, the overall nuance in Gbessa, Norman and June Dey’s characters was spectacular. I already mentioned this a little, but just the way that their experiences dictated the way they all handled their curses/gifts, how they walked the line of being simultaneously free and not free, was one of the nightlights of this novel.

I loved the magical realism aspects mixed into the real history of the country. Moore’s pride in Liberia is clear on every page and her goal in sharing its unique story with the world is accomplished with aplomb. Although I had some issues with the pacing and a bit of a slow start, I loved what I learned while reading this. Overall, this was a largely compelling “re”telling.

3 thoughts on “She Would Be King”