I received this book as an ARC from NetGalley back in April, and am a little ashamed to say that it took me this long to get to it. Honestly, I was completely drawn to the collection when I originally requested it, and was psyched when I was approved to receive it. And then, for some reason, I kept talking myself into reading other books first. Maybe because it was a short story collection and those are not always my favorite. But like I said, I was immediately into it when I first saw it, so who knows? Regardless, when it began making the rounds on social media with its recent official publication, I knew it was time to stop putting it off. And then, we lost electricity for a little bit during Hurricane Florence a little over a week ago (which was really not bad at all for me, where I live in central NC, though my thoughts are with the parts of the state that were not so lucky), and I knew it was a sign. If you aren’t sure how those things are connected: NetGalley does eARCs, so you have to read on a Kindle or other device, which is not my favorite format, but I was all charged up and ready to go in preparation for the likely loss of electricity. And thus…here we are.

How to Love a Jamaican by Alexia Arthurs 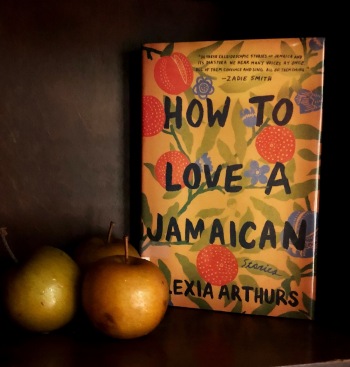 “Jamaica, such a small place on the globe in my World History class that if you aren’t careful you can easily miss it.”

For all that I put off starting this, I powered through it so fast; read it in less than a week and really enjoyed it. Overall, it was a fascinating glimpse into Jamaican (and a little bit general Caribbean) life, culture, language and beliefs from a great variety of perspectives, experiences and relationships with the island. From frustration to nostalgia, lifelong residents to vacation visitors, Arthurs paints an incredibly vivid image of Jamaica. Knowing that the author herself is Jamaican, grew up partially there and partially in the United States, this book felt, to me, like an exploration of all the paths her life (and the lives of people she knows) *could* have taken…and some, perhaps, that it did take. That may not actually be accurate at all, but it’s what reading these stories felt like to me. And I was into it. One other general thing I want to mention is that I liked the idea of the mermaid theme-ing throughout the collection. But in the end, it fell a little flat to me. It needed to be either more present, or less so, but the in-between that it hit was not the right spot. On the other hand, I loved the mother-daughter dynamics represented throughout – they were complex and thorough, foreign yet familiar, and entirely authentic.

And now, as always for my collection reviews, I’ll give a little snippet of thought on each short story:

Light Skinned Girls and Kelly Rowland: This was an interesting look at differences within a race, based on upbringing and background (just as with any people), and how that plays out/the strife it can cause…even though the root issue is something beyond the control of, and decided on years ago and by others, the people who are actual involved. It is particularly insightful and educational for those of other races, so, me. A really straightforward but wonderfully meaningful story to start the collection.  “I wonder if white people are as good at reading us. Probably not. We’ve spent our whole lives observing them. It makes sense that we’d be good at it.”

Mash Up Love: Ahhhhh the age-old saga of sibling rivalry. This was basically on theme with the idea of the prodigal son. Well written, but nothing special.

Slack: Wow. The little details are what make this one, the way you get just enough background to see how each little moment played together to lead, inevitably, to creating the moment of tragedy. And the seduction of the idea of mermaids, especially for imaginative youth, is used so well here.  “No one would wonder at the stories they were whispering to themselves until they were gone.”

Bad Behavior: A lovely and quick meditation on motherhood, the relationships between grandmother/mother/daughter/granddaughter, and the way reactions to each change the course of interactions for the others.

Island: Yes. Just yes. I loved the themes of this story, the feelings it conveyed. Also, I just get really absorbed into discussions of and emotions around sexuality (the realization and self-discovery of) and coming out. This one is particularly interesting as it addresses these themes within the very strict and specific Jamaican culture. “What, I asked myself, if we built islands around ourselves, because it’s no sin to be self-sufficient?”

Mermaid River: Such a sweet story about the memories of a boy and his grandmother. The color of nostalgia here is strong and permeating – it makes you stop and think back on your own moments with your own grandparents. And there is a wonderful little message about how even small and oft overlooked places are chock full of so much life. “But guilt often loses its flavor, I’ve found.”

The Ghost of Jia Yi: This is definitely one of the most layered stories in the collection. Exploring a girl far from home and depressed, dealing with being an outsider and making questionable decisions that haunt her because of it…and looking at it all through the lens of another foreigner as an incarnation of what could happen to her as a result (even though all those” bad” decisions are really just normal decisions for a person her age, but the consequences and expectations seem, and truly are, so much higher for her). I really felt a vibe from this story, deep and vibrating, that I hadn’t felt from another story in the collection to here and I liked it. Also, those last lines are really affecting. “America, the land of diversity, where people talk to who they think it’s safest to talk to.” “She isn’t the first and she won’t be the last woman to baptize her sorrows in the arms of a man.”

How to Love a Jamaican: I don’t know how I felt about this one. I mean, I liked the reading of it. And the theme of “this is all one needs to be happy,” but then not being fully satisfied with it, and possibly ruining it, even after finding it…that’s universal and well rendered here. But to read it this way, in such a large secret between a long-settled couple – it hurts me to imagine it happening to me, is all. This is a perfectly told tale of that situation though. “If someone could bottle a smell for all the feelings in the market, it would be as sweet as the sweetest-smelling mango and as bad smelling as the market madman who walks around picking up fruit that rolled off somebody’s heap.”

On Shelf: Whoa that was depressing. This was like a one-stop shop for all the possible judgement a women could get for her choices: education/work over family, late/no marriage or children, having standards for a partner that are “too high,” and more. And then when she caves, choosing someone for no better reason than she feels like her clock is ticking (someone that she’s not actually interested in and can’t share her full self with and definitely doesn’t love and who isn’t honest with her at all)…it almost physically hurt me. And thought I guess it’s ok for her, in the end, because she feels that the daughter the situation gave her was worth it…it was just a depressing story to read. Well written though. “When she really thought about it, what was marriage besides a savior from lifelong loneliness? And one could marry and still remain lonely.”

We Eat Our Daughters: Loved this collection of vignettes on mother-daughter relationships. They explore issues and pressures that are specific to Jamaican culture but are also, achingly, universally recognizable. “Maybe beginnings aren’t beginnings, maybe they are harder to pin down, like waves pulling off the shore at different moments, waves of all sizes and strengths, but eventually and ultimately they are all the same wide expanse of sea.”

Shirley from a Small Place: Just a really well developed look at the idea of yearning for a place and time when things were “worse,” even though you’ve “made it.” It really speaks to the power of memory and nostalgia. And again, this is one with a great depiction of a mother-daughter relationship. “It was like looking at the sky to see that something as eternal as the stars was no longer there.”

Chock full of cultural insight, capable writing and at least one mother-daughter relationship that you are sure to identify with (that is, if you have even been a mother or daughter yourself), this is a great debut collection. Incredibly solid short stories across the board that, though I do have some favorites, do not fall into the trap of a few star stories mixed with a number of duds. Thematically on point throughout, I look forward to seeing what Arthurs writes next.

2 thoughts on “How to Love a Jamaican”