I cannot remember where I first heard about this book, but I do know that I ordered it as soon as I saw it/learned what it was about. On theme with the recent increase of YA literature that tackles important social and equality-based themes, particularly those that are violence and race related (i.e THUG), this is a very strong addition to the field. I have been very “pro” this move to get more diversity and depth into the field of YA lit. Although these topics are heavy and difficult, they are realities that many YA readers deal with every day and ones that other YA aged people should absolutely be aware of, even (especially) if it’s outside their own lived experience. Willfully not addressing them because they are too “mature” for the age group is disingenuous and dangerous. And so, I choose to buy, read and share these titles, in order to do my best to support these authors, these issues.

Long Way Down by Jason Reynolds 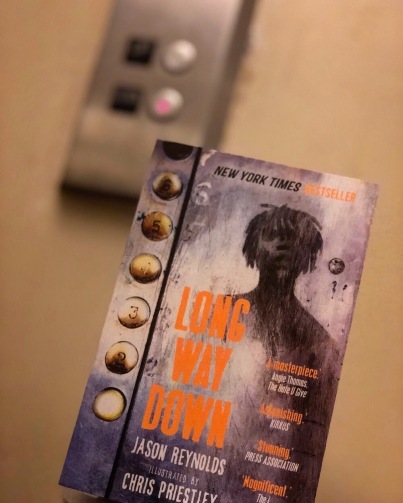 “Another thing about the rules. They weren’t meant to be broken. They were meant for the broken to follow.”

Long Way Down opens with Will’s older brother being shot and killed in a gang-related crime. And Will knows the rules. He knows what comes next. Don’t cry. Don’t snitch. Get revenge. Passed down through generations, there is no getting around the rules. So Will finds his brother’s gun, hidden in the middle drawer of his dresser in their shared bedroom, and heads out to follow through on the third rule… But on the elevator ride down to the lobby of his building, he is visited by a number of faces [ghosts] from his past. And Will realizes following the rules may not be as easy as he thought.

First, I have to address the fact that this book is written in verse. And it’s literally perfect. It was exactly the right formatting choice for this story/author combination. I am just so impressed with the precision of the language…as it must needs be with such limited room for exposition. Each line, each turn of phrase, each word, is weighted so heavily. Every individual piece (poem?) is so expressive and communicates so much with so little. And it holds up strong and beautiful under the pressure, with no sacrificing of character or “plot” development. In addition, the themes and references that carry throughout the book feel so purposeful – neither pushed too hard nor hidden too deeply – circling back around exactly when they should. The depth of meaning, emotion and message coming out of this story is just insanely powerful.  The entire book is an example of absolute mastery of language and intimate knowledge of what will resonate most.

As for the story itself, I know I already mentioned in the intro how it addresses such important and timely topics. And it’s done with such aplomb. It’s real and gritty, yet graceful and smooth at the same time. Will’s time in the elevator, everything he learns about his family and what The Rules have done to them, carries an almost oppressive significance (one that you can almost actually feel along with Will). Plus, the fact that pretty much the entire book takes place during a 60 second or so window is incredibly creative and striking. And the ending, those last two words. Reading them deals a blow so hard it’s almost physical. I can’t really say more, as I don’t want to give anything away, but just trust me that it’s worth reading the book to get to them. (To be fair, it’s way more than worth it, considering that, being written in verse, it’s an insanely quick read.)

Last thing to mention: the illustrations. They are exactly right for the atmosphere, perfectly on tone.

Don’t let the fact that this review is so short (at least compared to many of my others) minimize the importance and impact of this book. There’s only so many times I can say how affecting it was. You just have to go read it.

7 thoughts on “Long Way Down”