This book has been making the rounds on bookstagram. Everyone is talking about it, saying how wonderful it is and, how even though it is quite long (almost 500 pages) it’s such a fast read. And we all already know how much of a sucker I am for books with lots of hype. Haha. I hate being left out. I have to know what all the talk is about! Plus, I do really love a good generational family saga. One of my favorites in this genre, that I read years before starting to write official reviews, is The Shoemaker’s Wife by Adriana Trigiani. And, of course, I have mentioned my love for The Bronze Horseman trilogy multiple times. In any case, all signs pointed to me reading this one…and here we are. 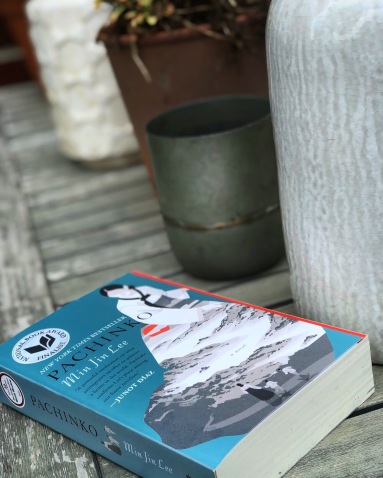 “Living everyday in the presence of those who refuse to acknowledge your humanity takes great courage.”

Pachinko is, as I mentioned, a generational family saga. Starting in Korea in the early 1900s, a young Sunja is impregnated by a wealthy stranger. And thus begins an account of her life, and her family’s life, in the decades that follow. Spanning from Korea to Japan to America and back from the early 1900s when we meet Sunja to the late 1980s when we bit adieu to these characters, the legacy of her decisions and her family’s starting circumstances will impact every part of the narrative.

I have to start by saying that, although everyone said this was a quick read, it was not one for me. That does not mean I didn’t thoroughly enjoy it, wasn’t super impressed by it, or didn’t learn anything from it…because all those things, and more, are true. It’s just that this was not a fast book for me. I read it slowly. Savored the characters and their development. Enjoyed the journey. I didn’t rush the read. That’s strange for me, as I am usually a speed reader. But something about this book made me slow down my pace. And I’m grateful for it. It made the impact of this family’s story all the greater. Lee’s prose is light and easy to follow, despite the intensity of the topics and the depth of the story, so I can understand why, for many, this book flew by. But at the same time, the breadth of issues and events that are covered during the time period covered in this book are myriad, and for me to fully appreciate everything, I needed more time with it.

And my goodness did I learn a lot. I mean, I knew about the general situation in WWII Japan, how the US ended things there, and how that led to a split in Korea, and the following Korean War and the North/South Korea situation that we are still dealing with today. But everything I knew was from a bird’s eye view sort of level. I had never considered, or been given a chance to see, the time period from a more personal, individual level. And I had no idea about the extent of the discrimination and disgust with which the Japanese treated and viewed Korean immigrants. This book was phenomenally eye opening and educational for me regarding these immigrant issues. And it was something too, to see that immigrants historically and worldwide have been treated the way they still are today. It’s disheartening to see how little has changed. Yet at the same time, maybe comforting to realize that, as bad as things are now (worldwide and particularly in my own country), they are not without precedent and, at least partially (hopefully) have gotten a bit better…if slowly and not nearly as much as one would hope. Or perhaps nothing has changed or gotten better at all, and it’s just that the locations for these mistreatments are constantly moving/changing. It’s hard to address an issue that will not stay still. In any case, that’s all very off track from my review. The main point is that I learned quite a bit from this book. And after doing further research of my own after finishing (a habit I am in after finishing books on topics I am less familiar with – because I always find myself wanting to know more!), I am incredibly impressed with the amount of research and effort that clearly went into the crafting and writing of this novel.

Other than the universal immigrant experience that is the center point of this novel, Lee also tackles a number of other complex themes, such as familial love and loyalty, national loyalty, sacrifice, traditions (and challenging them), ambition, and the far-reaching implications of love (both positive and negative). We are introduced to a fascinating number of settings throughout the novel, from poor/remote Korean villages to Japanese cities and slums to busy marketplaces and restaurants to primary school playgrounds and elite university classrooms to the titular pachinko parlors and the insider view of the Korean criminal underworld that is the tie holding together every individual string of stories in this saga. (Side note: I had no idea what pachinko was before reading, but after finishing I am so impressed with the way this game of “luck” was used both as a metaphor for the reality of life for Koreans in Japan, as well as a thread tying this entire novel together.) The development and characterization of the family members is richly detailed. I loved getting to know this family, loved the moral and physical strength of Sunja and the other women, loved the pacing and unfolding of the story and how each generation is impacted by the previous (some able to move on from the past and some more permanently marked by it). It’s fascinating to watch the years unfold and, when you get to the end, look back and see where you started and how much has changed.

Bottom line – the hype for this book is absolutely well deserved. This is a novel that is believable and emotional and pulls you right in. More than anything, I love when a “normal” family tale can become something celebrated in the hands of a great writer. These are the kinds of lives that represent whole peoples and generations, but, in the day to day when they are lived, are looked at as mundane and unremarkable. Lee takes these everyday lives and creates something grand with their struggles and reality. There is something truly beautiful, and so important, in this kind of story-telling.

As I mentioned, so many important themes are covered in this novel, and I want to highlight some of the related passages that really stuck out to me:

“There was nothing else he could think of, and he wanted to spare her the cruelty of what he had learned, because she would not believe that she was no different than her parents, that seeing him as only Korean – good or bad – was the same as seeing him only as a bad Korean. She could not see his humanity, and Noa realized that this was what he wanted more of all: to be seen as human.”

“Learn everything. Fill your mind with knowledge—it’s the only kind of power no one can take away from you.”

“No one is clean. Living makes you dirty.”

“Patriotism is just an idea, so is capitalism or communism. But ideas can make men forget their own interests. And the guys in charge will exploit men who believe in ideas too much.”