I’ve had this book on my TBR for some time, and had heard nothing but great reviews of it. Then, about two weeks after I found it at used bookstore (and decided to grab it), it was chosen as the June book for my long distance book club. Sometimes, timing is everything.

I’ll Give You the Sun by Jandy Nelson 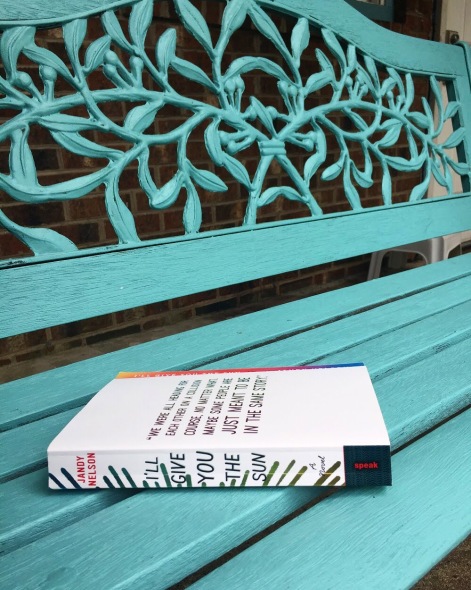 “We were all heading for each other on a collision course, no matter what. Maybe some people are just meant to be in the same story.”

So, this book is the story of Noah and Jude, twins living somewhere in the sunny part of California with their parents. The book opens with Noah telling the story, at about 13 years old. And moving from there, the POV switches back and forth between the twins, from “young” Noah to Jude at 16 years old. In between the two times, their mother died, their once super-duper close relationship has dissolved, and they’ve sort of switched personalities (Noah turning from an artsy, whimsical kid to a “regular” high schooler on the track team, while Jude went from the popular girl to a weird, reserved/obsessive personality). As the story develops, Noah’s “past” narration nears the point that everything broke, while Jude “present” narration brings us closer to the point where the consequences of all the secrets and miscommunications come to a head.

There was so much to love about this book. In fact, there was almost everything to love. First, let me just talk about the language. It. Was. Perfect. This is a story centered around art, artists and artistic impulses (particularly ecstatic ones). And the language matched that feel spot on – a mix of word choice precision and fantasticalness that was measured and fanciful in a juxtaposition primed to elicit the most emotion possible in the reader. In addition, I just loved the dialogue. I particularly loved the back and forth between Jude and Oscar, after they meet, but really all the interactions are quick and smart and very realistic. Good dialogue is one of my make or break points in reviewing books, especially in YA, but Nelson nails it. Relatedly, I love all the little tics of the characters and how, once introduced, they were flawlessly woven into the rest of the writing. For example, Noah’s titling of self-portraits to illustrate how he’s feeling and Jude’s quoting of her grandmother’s sayings in reaction to most situations. I also loved the little quirks like Noah’s description of how people like his mother seemed to have “blown in” from somewhere else or Jude’s euphemism of “missing buttons” to describe someone crazy. Just…so many unique little details that really brought life to the characters and the story.

As for the story itself, it was so intricately woven together. I read somewhere that the author spent a long time writing this book, and I believe it. The reveals are spaced and detailed just right to provide the reader that desired combination of assuaging and growing curiosity, keeping us on the edge of our seats as we get closer and closer to the final confrontation(s). This happens simultaneously with some superb character development, across the board. Even though there are some, like the dad, that I still would have liked to know more about, I think this has one of the most developed full sets of characters, even the side ones, that I’ve ever read in a YA standalone. And although this is one of those books that I do not recommend reading the end of in public (I had a really hard time not crying everywhere in the coffee shop I was in), that doesn’t mean all the emotion was reserved for the end. There was anger and fear and love and also definitely some hot and bothered-ness coming at you all throughout the novel. Honestly, this story was straight chock full of emotions, all the emotions, the good and the bad, in just the way real life is, no sugar coating or holding back. And then at the end, when we finally see everyone after un-shouldering the burdens of their secrets and misconceptions, the relief and readiness to finally move on/find joy is just…palpable. As Grandma Sweetwine would have said, a broken heart is an open heart. And this book ends with so many open hearts.

Throughout this novel, I was so unbelievably invested in all the relationships in the story, especially Jude and Noah’s – both with each other and with their special someone’s. And though perhaps some of the secrets/malicious actions are beyond what I can imagine having perpetrated, and perhaps the general goodwill at the end of the book, even after all the malintent from earlier, might seem a little too farfetched/cheesy to some, it’s also reasonably understandable within the personalities of the characters. We saw where they started, we were shown over the course of the story how the artistic impulse is both beautiful and burdensome, and we watched as everyone grew/changed to get to that point over the course of the novel.

For me, this novel really hit at the core of what it means to be human, what matters and what doesn’t. This is such a powerful tale of grief and art and family and acceptance and love and destiny. I heartily recommend it.

As I mentioned, the language was everything in this book, so you can imagine, I’m sure, how hard it was to pare down the passages I wanted to share. Enjoy this, likely overwhelming, selection:

“We wish with our hands, that’s what we do as artists.”

“I didn’t know you could get buried in your own silence.”

“…but lots of things are possible and extremely unlikely, like world peace and summer snowstorms and blue dandelions and what I think happened on the roof last night.”

“Reality is crushing. The world is a wrong-sized shoe. How can anyone stand it?”

“I’ve tried everything… Absolutely everything. I have this weird book and I scour it nonstop. I’ve done it all. I’ve slept with her jewelry under my pillow. I’ve stood on the beach at midnight, holding up a picture of the two of us to a blue moon. I’ve written letters to her and put them in her coat pockets, in red mailboxes. I’ve thrown messages into storms. I recite her favorite poem to her every night before I go to bed. All she does is break what I make. That’s how angry she is.”

“No woman can resist a man who has tidal waves and earthquakes beneath the skin.”

“I close my eyes and drown in color, open them and drown in light because billions and billions of buckets of light are being emptied on our heads from above.”

“I lean back out again into the night. ‘I gave up practically the whole world for you,’ I tell him, walking through the front door my own love story. ‘The sun, stars, ocean, trees, everything, I gave it all up for you.’”

“So Plato talked about these beings that used to exist that had four legs and four arms and two heads. They were totally self-contained and ecstatic and powerful. Too powerful, so Zeus cut them all in half and scattered all the halves around the world so that humans were doomed to forever look for their other half, the one who shared their very soul. Only the luckiest humans find their split-apart, you see.”

“‘Or maybe a person is just made up of a lot of people… Maybe we’re accumulating these new selves all the time.’ Hauling them in as we make choices, god and bad, as we crew up, step up, lose our minds, find our minds, fall apart, fall in love, as we grieve, grow, retreat from the world, dive into the world, as we make things, as we break things.”

“Love does as it undoes. It goes after, with equal tenacity: joy and heartbreak.”

“Quick, make a wish. Take a (second or third or fourth) chance. Remake the world.”

3 thoughts on “I’ll Give You the Sun”