I think I’ve said this before, but it’s super true, so I feel like it’s worth repeating. I LOVE Jane Eyre. It’s probably my favorite classic. And not only that, but I cannot get enough Jane Eyre retellings. Jane Steele by Lyndsay Faye is probably my favorite, but I own and/or have read at least 4 others. Straight up, I think Jane Eyre retellings might be my favorite literary genre. In any case, when I first heard of this one over a year ago, a YA retelling of Jane Eyre in space, I was pretty much like “I need it now.” Too bad it wasn’t set to be published until now. And even after publication, I had to put in a request for my library to purchase it, then request it, and then wait for it to arrive. So basically, I think I’m the first person to have checked it out. Which makes me feel both very cool and very nerdy. Anyhoo, without further ado, here’s my review! 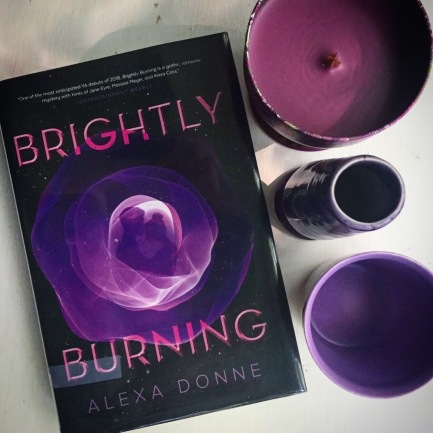 “Sometimes the loneliest you could be was surrounded by people who didn’t understand you.”

So we all know the story of Jane Eyre: rich, single, mysterious estate owner falls in love with the bold (read: honest) governess he hired for his young charge, she falls back after initial consternation about his sullen broodiness, they try to get married but crazy current wife in the attic breaks it up, governess runs away heartbroken and disillusioned, time passes, governess is emotionally called back to estate somehow, finds that fire has disfigured her man and destroyed his estate, but the crazy woman is gone and the love is still there so they live happily ever after. (That was a fun recap to write.) Well, that story is basically all there in this retelling. Meaning there are no major plot surprises, but isn’t that what one wants/expects in a retelling?

This was a really well-paced retelling, with smooth, competent writing that does not overly rely on you knowing the original to fill in holes in its own development (which is my biggest pet peeve in retellings). I felt like Stella and Hugo (our Jane and Rochester) were a good match for each other, with some fun new characteristics in addition to the throwback ones (like Stella’s art and Hugo’s self-deprecation, though at times that did get a bit too much to handle). I also really enjoyed some of the other extra characters, again both in throwback form (Officer Xiao, Jessa) and new (George, Sergei, Jon). Plus, my heart enjoyed some of the referential naming, Like Hugo’s last name being Fairfax, his ship being named the Rochester, Stella’s name being mentioned as “common,” and other similar nods to the original.

As far as plot changes, a number of smaller things, like who the young charge that needs a governess and who the crazy woman in the attic are, do get a remake. Plus, with the young age of the protagonists (this is a YA retelling), the reason for the governess running away has to be changed a bit. And it’s done really well here, adding a whole new dramatic layer to this love story that affects the wider “world” and gives it that sort of dystopia feel that is very popular in YA fantasy/sci-fi right now. And though I love the original love story so much, I did like that there was a bit of a larger societal rights/hierarchy theme addressed here. It just gave the story a little more as far as teeth and allowed for a little extra drama. The format may not have been my favorite (biological science not being a particular interest of mine), but I appreciated the intent within the greater story. I also liked the way that the circumstances of being in space do a great job paralleling the gothic Victorian world of the original Jane Eyre in a way that seems fairly natural. It’s hard, in a contemporary retelling, to find good and believable reasons for the need for a position as a governess in an isolated home or why a quick marriage between anyone from such different backgrounds would be unacceptable in the way it was for Jane and Stella. Plus, there needs to be a reasonable explanation for Stella’s low self-esteem and belief that she wasn’t good enough for Hugo…and though women often (unfortunately) deal with imposter syndrome today, this situation still felt more likely to me than it would have in a realistic modern setting. And the ending was a great, wonderfully (and expectantly) cheesy, finale. A great adaptation of the ending to fit the story and wrap it up the way the reader wants it to be.

All in all, this was a really well-done adaptation of a classic story into a futuristic space setting. It was totally cute and binge-able, as YA and as a familiar love story. I did not want to put the book down at all (I read it in two days). There’s a quote on the back that says this book is for “fans of galactic adventure and star-crossed love…” and though I never really thought of myself as that type of fan, this book definitely made me one. What a wonderful and unexpected discovery about myself. If you are looking for something light and entertaining with just the right amount of love and drama (or if you love Jane Eyre as much as I do), then go for this one!