This one has been on my TBR for awhile now, and I jumped it to the top after it was one of the most recommended books on a “what to read next by diverse authors” bookstagram post that I put up a few weeks ago. And thank you to all the voters – they were right, this was something special. 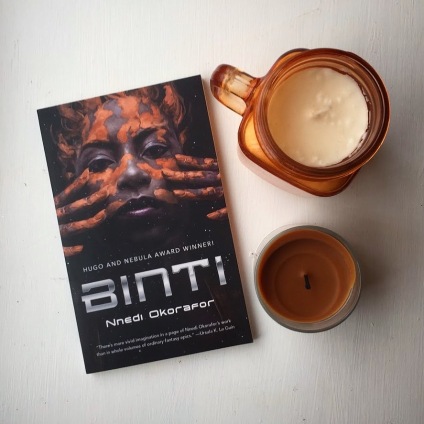 “…just because something isn’t surprising doesn’t mean it’s easy to deal with.”

Binti is the first in her family, the first of her kind even, to be admitted to the great Oomza University. And though she has to run away, betraying the wishes of her family and the traditions of her people, in order to go, the call is too great for her to ignore. Although she is looked down on by most of her fellow travelers for her “tribal” customs, she is able to become friends with other students on their way to Uni…the power of mathematical curiosity bonding them and proving stronger than cultural differences. But during the weeks long journey from Earth to Oomza, the ship is attacked by Meduse, a feared alien race with plans to attack Oomza to retrieve an important stolen artifact. Binti knows that she is special, is meant for more, and she will have to use all her intelligence, resourcefulness and inner harmonization to bring about a peaceful solution.

This was really my first foray into novellas – longer than a short story but definitely not novel length. And I jumped in head first, reading the entire piece in a single sitting. Honestly, it probably took no longer than 90 minutes to read, but that 90 minutes was packed full of culture and creativity. I know this type of story will not be for everyone, as I can definitely understand those who be frustrated with only this small peek into this world that Okorafor has created. In fact, I too would love to read more about the different civilizations and philosophies that inhabit the planet of Oomza and its university, the scientific “magic” that Binti specializes in, and Binti herself, because I just know that her story is not over yet. But at the same time, I respect the scope of what Okorafor was able to build and communicate in such a limited time. And my wish for more does not diminish the enchantment of this small glimpse we are given. Each piece of information and interaction must be that much more finely crafted because the time for development and creation is so short and each piece we are given means that much more. There is a finesse and skill there that cannot be denied and is its own type of mastery.

As for the story itself, it is a wonderful blend of lessons that we can, and should, apply to the real world. There are parallels, of violence, intolerance and one-sidedness, with so many situations that we face here on Earth today. The connections and commentary are unmissable. But it is not just a condemnation of the way things are…the answers for how to do/be better are there as well. There is a definite suggestion of hope and cooperation in the moral of the story.

Binti is a believable and relatable heroine. Having left behind everything she knows for the hope of a greater future, she is completely unprepared to deal with the situation she ends up in. She has moments of self-doubt, overwhelming terror, succumbs to her own prejudices, but in the end is able to just barely pull herself together to work for something larger than herself. She is not a “chosen one” in any way, but a fish way out of water that finds herself in a near impossible situation and has no choice but to cope if she wants to survive.

Imaginative and fascinating, this is a short (and sweet) futuristic story of the power of communication and mutual respect in ending conflict.