I had heard of this book in passing, but really had no idea what it was about at all. I think I’d seen someone on Instagram post that their mother was listening to the audiobook and loving it, had told her it was hilarious. So when I was looking for a new audiobook at the library and saw this one, I figured why not? Well, whoever that person’s mother is…she was right. In addition to being a thoroughly entertaining story, the narrator was phenomenal! There were a number of times where, upon reaching my destination, I did not want to stop the book and get out of the car. 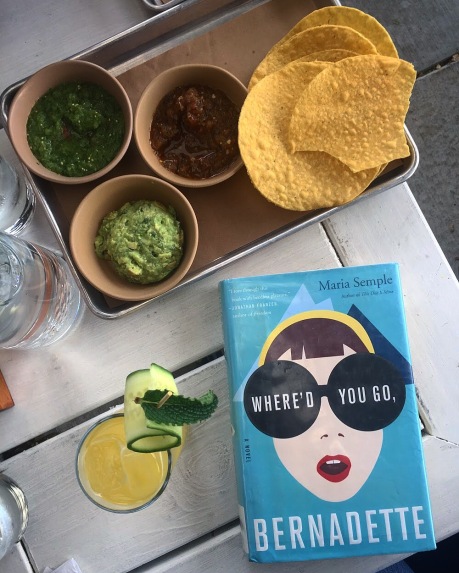 Starting with my quick synopsis: this book is, obviously, about Bernadette, an idiosyncratic middle-aged mother living in Seattle and choosing to leave behind a past of reasonable fame and drama. Her husband, Elgin, is a VIP at Microsoft and her daughter, Bee, is a precocious and incorrigibly positive middle schooler. The story is told through a collection of letters, emails, transcriptions, and various other documents written to/from/by neighbors, Elgin and his coworkers, the school administration, other school parents, a digital personal assistant, health care professionals, and even the FBI. These documents are interspersed with occasional asides from Bee, like stories about her friend Kennedy, time spent with her mother, their dog Ice Cream, and her excitement about the upcoming family trip to Antarctica (as she requested, in celebration of her wonderful grades and impending middle school graduation). So for all that this story follows Bernadette, and her gradual but mostly unavoidable descent to a mini break down and disappearance, followed by a dramatic search and rescue mission orchestrated by Bee, it’s all told circumstantially until the end, when we really, finally, get to hear from Bernadette herself.

First, let me just say that, even though this epistolary story telling format is not always my favorite and (I feel) can often become trite, it was well utilized here! It lent itself to the story’s exploration of different perspectives of the same events, and how mistakes and misinterpretations can run rampant, causing anything from humorous miscommunication to more serious misunderstandings. Plus, it was fun to hear all the characters individual thoughts/feelings come through in their writing, as opposed to the more limited way we’d hear from them in a normal third person narrative. And, with the narrator being so awesome (and OMG was she amazing), all the separate voices really came to life in a special way as I listened to the audiobook.

Overall, this was such a well told and developed story – fun and dramatic with snarky insights. I found myself giggle-smirking quite often. It deals with some deeper themes in a lighthearted and entertaining way, which is a tough line to walk, but is done well here. It’s got just enough hyperbole and caricature that it mimics life in a way that shouldn’t make anyone feel altogether called out and adds a great bit of humor to what is otherwise a fairly “normal” story about people living their lives. However, it’s real enough, addresses enough difficult circumstances, primarily regarding mental health and being a mother, that there is real substance. It makes you think, at least a little, about times where you possibly reacted to things a little excessively (or know someone that acted that way against you), and causes you to maybe give a little sympathy and benefit of the doubt to the opposite party. And it shows that everyone, no matter how perfect their life may seem or how much denial they’ve buried themselves under, has a lot to deal with and, in most cases, is doing their best in handling it.

This quirky novel is a bit of a satire for the modern age and carries with it a comical but impactful message. Under the same circumstances that I recommend The Seven Husbands of Evelyn Hugo, this is a great novel for anyone looking for a book on the lighter side, but not interested in going full-on fluffy.

9 thoughts on “Where’d You Go, Bernadette?”