This is the first time I’ve participated in Top Ten Tuesday (TTT) and I’ve already managed to mess it up by posting on Wednesday. Haha. But I wanted to do something special for Valentine’s Day, something more than a normal review, and the prompt for this week was just perfect: Love Freebie. So, pretty much, an open-ended “list your top ten love related books” sort of thing. So, here I am, a day late. Thanks for bearing with me.

So, here we go! I’m gonna list out my top ten relationships that have stuck with me. Pretty much, this means that for some reason these bookish relationships punched me in the gut, caused me to use an entire box of tissues, are the ones I go back and reread sections of when I’m in a slump or feeling blue, or for some other reason are so beautifully/uniquely/deeply developed that I cannot let them go. (I’ll be listing in reverse order, so enjoy the build-up. Hehe.)

SPOILER ALERTS: There may be some spoilers in my little comments, so be careful reading through them if you haven’t read the books and really want to. Anything spoiler-y would be slight/unintentional, but just FYI.

Honorable Mention (12): I know I know, cheating. Ten is not enough! There are like 5 or 6 more (on top of these 2 extras) that I wanted to list but don’t have space for! In any case, this is a twosie: Six of Crows and Crooked Kingdom by Leigh Bardugo. I love Jesper and Wylan – they are my favorite actual “relationship” in the book. But I added this duology to the list more for the group dynamic. I have never felt more invested in a group of “friends.” The trust and reliance and love that develops among them all is believable, flawed, but inevitably so so strong. I’ve never remembered a full cast of characters so clearly as I have this one.

Honorable Mention (11): I couldn’t help it, I needed to add another, because this wasn’t a specific couple I wanted to highlight, but an entire body of work. If you are looking for a light, uplifting, adorable love story, literally any book by Sarah Addison Allen fits the bill. They are light and quick, with a little bit of magic (both literally and figuratively) that is guaranteed to leave you smiling.

10. Elena and Clay – Bitten by Kelley Armstrong. I read this so long ago that I don’t even have a review posted for it on Goodreads, but these two are such a strong power couple that they make the list even from memory alone. I love how the relationship starts with some bad blood that is, early on, revealed to be based on a misunderstanding and the strength and trust in their relationship grows fast and deep. Plus, there are definitely some steamy parts, if I remember right. Also, Elena is such a strong female and I love how that shines through in how she handles the relationship. I am very for women holding their own like she does. Bonus, if you fall in love with them like I did, there are tons of follow-up books (all with awesome female leads) and it was even turned into a 3 season show of the same name (on Netflix, and pretty well done!).

9. Alucard and Rhy – Shades of Magic trilogy by V.E. Schwab. It takes a long time for this one to develop. Like, one of these characters isn’t even introduced in the first book. But it doesn’t matter. Once you know them both, all you want is to cheer and cheer and cheer until they’re adorable, sensitive, tentative selves figure it out and find their happy together.

8. Lazlo and Sarai – Strange the Dreamer by Laini Taylor. This was such an original development for a relationship. I can’t say it was necessarily even overly romantic in nature, just two “in the margins” souls that found something like a home in each other. But the cool part was that it all happened in dreams – these characters were never in person as they get to know each other. It’s such a sweet, otherworldly concept and their growth together is an endearing mix of naivete/hope and deep sorrow of their lives lived. Gorgeous and surreal.

7. Milo and Suzie/Death – Reincarnation Blues by Michael Poore. Another one that stuck with me because of the way things develop. Milo is living his many lives, each one presumably bringing him closer to his “last life” and nirvana moment, and Suzie is the incarnation of death that meets him in the afterworld after each life ends. It’s quirky and creative and strange and I loved it.

6. Rosemary and Sissix – The Long Way to a Small, Angry Planet by Becky Chambers. This is the most different relationship on this list. Rosemary is a human, more or less, and Sissix is a reptilian alien species. It takes diversity and representation to a whole other level, but it’s insights and nuance can absolutely be read in reference to our own, earthly, sexual diversity. It’s non-traditional in such a radical way that there’s no way to quantify or compare it and I love that! Also, as was pointed out by Ellie, the fact that it’s the human who tries to understand and fit themselves into the ‘alien’ way of doing things, is refreshing.

5. Mr. Rochester and Jane Eyre – Jane Eyre by Charlotte Bronte. My favorite ever “classic” relationship. It’s a beautiful inter-class story of redemption and love. And I just could never get over the end, when Jane returns and stays with Rochester after the fire. Its general moral of heart over “looks (physical and societal)” is one of the first like it I ever read and it’s always with me. (Honorable mention of “classic” relationships for me: Elizabeth Bennet and Mr. Darcy – Pride and Prejudice by Jane Austen. Because I can’t not mention them here.)

4. Jamie and Claire – Outlander by Diana Gabaldon. The must be one of the most epic love story ever written, I swear. Their love develops perfectly, and holds strong through so much adversity and separation and time (in all senses of the word), that I cannot think of anything else like it. Plus, lots of well-written steamy scenes. Mmmmmm. I fell hard for Claire and Jamie from the start and 8 giant books later, I still cannot get enough.

3. Kellen and Wavy – All the Ugly and Wonderful Things by Bryn Greenwood. I know this one is a little controversial (no spoilers, you’ll just have to read it to see why), but my emotional investment in these two over the years is seriously beyond compare. There are so many levels to their relationship, so many sacrifices, trials, challenges that they fight through (particularly from/for Wavy). The feels here were SO strong and it was so gorgeously, perfectly developed.  Plus, it does raise some difficult, but great, questions about love and what boundaries, if any, there are. So powerful. GAH. *Have tissues ready.

2. Feyre and Rhysand – ACOMAF by Sarah J Maas. Passion. So. Much. Passion. First, I have never read such a phenomenally done 180 degree turn in a love story. And it’s a risk, a big one (IMO), to build up one relationship and then totally switch it. BUT IT DELIVERED. And when you go back and look at the first book again, with your new eyes/POV, it’s just beyond impressive what Maas was able to do/hide/later reveal. And oh lord, Rhys, your selflessness for love is almost too much. Also, there is a particular section of this book (Chapter 55 – you know what I’m talking about) that is my GO TO when I need a pick-up. I have read it like 100 times and it never fails. Never. My heart…it just melts every time for these two.

1. Tatiana and Alexander – The Bronze Horseman by Paullina Simons. My number one couple. Like, this book broke me. It emotionally devastated me. I cried for HOURS and had trouble sleeping for at least 2 nights after finishing. I have never been affected like that by a relationship before. The pacing and development of their love is….beyond anything I have ever read. It’s raw and sweet and passionate and harsh and ugly and real in turns. And as the two age, in the follow up books, they face challenges both normal and extraordinary and though they do not always handle them right/well, that just adds to the reality of the connection between them. I cannot recommend these highly enough, but prepare you heart because it will try to explode. (Bonus for you: a sort of embarrassing story. When I first read this, I did not know it was the first in a trilogy. So when it was done, and it ended in a very…no spoilers: heartbreaking…place, I DIED. Two days later, when I realized there were two more, I could not get my hands on them fast enough, seriously. OMG. I was so glad what I thought was the end wasn’t actually the end.) 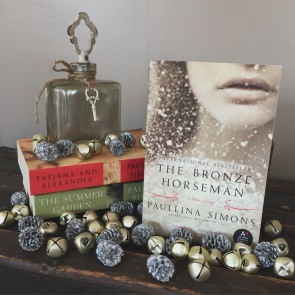 Well, I hope you enjoyed that insight into my mushy side. I hope something on this list resonated with you (or gave you a new book to try). Also, I clearly love a good romance and I’m always looking for new ones to add to this list…let me know – do you have any suggestions for me?!