This book was the January choice for my long distance book club. I’ve read a couple books by Jodi Picoult (she is ridiculously prolific), and have enjoyed them, but it’s been years since the last one. I vaguely remember that they all have certain things in common, like alternating POV narration and, of course, a lot of drama related to a singular event/issue. Other than that, I actually didn’t know anything about this book going in. Somehow I had managed to never actually read a summary of the book before starting it. I’m not sure how that happened. Regardless, true to form, this book tackles a difficult topic in a clearly well-researched way and our discussion of the book was awesome – there was so much to talk about. 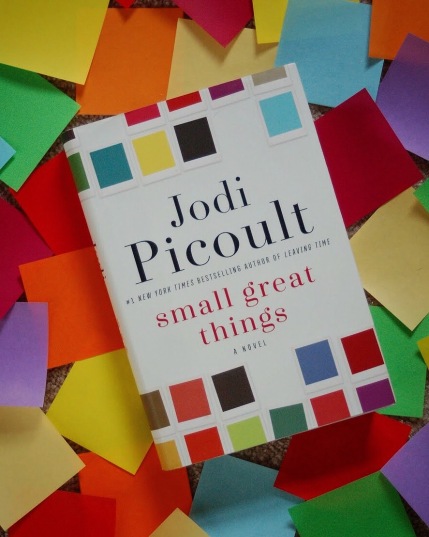 “How many exceptions do there have to be before you start to realize that maybe the truths you’ve been told aren’t actually true?”

Small Great Things, named in reference to a quote from MLK Jr. (“If I cannot do great things, I can do small things in a great way.”), tells the story (stories) of Ruth Jefferson, Turk Bauer (and his wife Brittany), and Kennedy McQuarrie. Ruth is an L&D nurse that has been practicing for 20 years at a small hospital in Connecticut. When Turk and his wife come in to have their baby, they ask for Ruth to be removed as their nurse because they, as white supremacists, are not comfortable with a black nurse touching their child. When disaster strikes and the baby goes into cardiac arrest and dies, the Bauer’s see Ruth touching the baby as part of the resuscitation efforts and accuse her of causing the death of their baby. Kennedy is the public defender who takes Ruth’s case. This story is told from their three, alternating, perspectives.

I am having a really hard time writing my thoughts about this novel. Starting with the easy stuff, the hallmarks of Picoult’s books are all there. It’s the high drama and complicated intersecting stories. It’s the research about L&D, postpartum care and courtroom performance, that is clear through how in depth the story is. It’s the well-crafted supporting characters that, in my opinion, are sometimes even more compelling than the main characters (For example, Ruth’s son Edison and Turk’s wife Brittany – their character development and denouements as they experience the unfolding story are transformative and eye-opening, for both themselves and the reader). It’s the tension she creates that actually, at times, had me so stressed about what was coming next that I didn’t want to pick the book up again. And it’s the fast-moving, complex dialogue, particularly in the courtroom, that really bring the scenes and characters to life. All that (despite an ending that was perhaps a bit too perfect to be real), that made this an impressive, page-turning read.

But here’s where things get more…difficult…for me. I feel like Picoult chose her POVs for maximum shock impact and, because they are almost all foreign to her, seemed too caricatured or buzz-word-y for me. Definitely the most compelling narrator, as far as how “real” the voice felt, was Kennedy – essentially the character that is most similar to Picoult. It’s clear she did research to write the parts for Turk and Ruth, and not just because she talks about it in the afterward, but it seems to me that she tried too hard to hit all the important “thoughts” or “stereotypes” of/from those characters (trying to over-include from said research) and so they lost their individuality and became manipulated figureheads for an entire group of people. To this point, a lot of sweeping, black and white (no pun intended), statements are made by Ruth and Turk that symbolize what outsiders think of “people like them” or what “people like them” think about others. This same sort of generalization applies to Ruth’s sister, Adisa, and Kennedy’s mother. So I guess the point I’m making is…I’m maybe uncomfortable with Picoult writing from these perspectives that aren’t hers when there are POC writers/authors who could have told those parts of the story better (and likely have) without the support/audience that Picoult has.

On the flip side, I do think that it’s worth pointing out that Picoult’s primary audience is a group of people that look like her. People that otherwise might not pick up a book on this topic and who are likely the people who most need to be exposed to the ideas of ingrained and institutionalized racism. The most important part of this book, the one that you can tell was most striking to Picoult herself because it’s the most well-developed transformation in the story, is Kennedy’s coming to terms with her own internal prejudices and how, just because they are not overt (like Turk’s), does not mean they aren’t just as harmful (if not more so). The importance of recognizing, so that you can then address, your own racism is incredibly difficult and insanely important. So to that end, I feel like Picoult is doing something good in using her platform to introduce some cognitive dissonance into a group of people that may otherwise never encounter it, because they wouldn’t know, or want, to go searching for it. But the fact that she has this platform to give a voice to people who do not have a platform for their own voices is, in essence, the root of the problem.

I think what I would have LOVED to see, what would have made this book so much more, is for it to have been a collaboratively written novel. In the afterward, Picoult talks about her research for this novel, her concerns over making sure to get things right in addressing this sensitive and complex topic, and her responses to likely negative feedback from both white and POC readers. And kudos to her for acknowledging that her own limitations therein. But what I think would have been incredibly impactful would have been for Picoult to approach a POC writer to co-author with her. It would have added depth and truth to the novel, as well as actually giving a voice to the community this book professes to voice for. Picoult does truly have a great presence in contemporary literature and using that to truly practice what she says she hopes this book will do would have spoken a lot to her actual investment in the issue. Alternatively, even a list of “required reading,” books on similar topics by POC authors, that people could look into if they want more on this topic would have been something. All in all, I think some fabulous opportunities were lost.

This got long, so I’m a little sorry for that, but as I said, I had so many mixed thoughts and emotions while reading this and I’m still not totally sure how I feel about it. Where Picoult falls on the spectrum of “using your platform to help” to “coopting a story that is not yours” is something I don’t have an answer to and is not really even my question to answer. But no matter who is doing the writing, this issue of racism in America (and especially the institutionalized racism in the US courts) deserves all the air time it can get. Picoult uses that issue to tell a story for entertainment purposes, when it is actually a horrible reality for many, but it does at least bring light to the subject. And maybe, hopefully, its exploration of the many ways that people’s vulnerabilities can be taken advantage of and the internal prejudices we all have will help readers acknowledge and challenge themselves…and perhaps inspire some self-examination or even encourage them to make a statement or take a stand in social justice that they wouldn’t have considered before. Who knows?

If this is an issue that you want to learn more about after reading this novel, here are some further reading suggestions from me, with links back to my reviews for each. It’s not exhaustive or totally representative, since it’s from my reading experience alone (and for all that I wish I could just read all day, I don’t have the time for that…), but it’s a place to start: