Skip to content
I’ve heard a lot about this book and all I have to say is that I regret taking so long to get to it. I postponed for a long time because I just am not really into science, so I thought a lot of it would be boring. And if I’m honest, I was also a bit self-conscious that there was a lot of it that I wouldn’t understand. I definitely shouldn’t have worried. And I encourage anyone who is unsure about the book because they think it’ll be too boring and technical, too science-y, to go to their local bookstore or library and pick it up now, because those concerns are absolutely baseless.
The Immortal Life of Henrietta Lacks by Rebecca Skloot 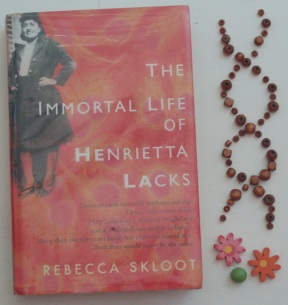 “This book was both a phenomenal introduction and basic summary of cell and tissue research and an exploration of the history of racism and marginalization, unto the present day, in the United States and specifically in the field of scientific research and medicine. This is, as is mentioned many times throughout the novel, a story that perfectly mixes the scientific and the human interest. Though it is based in a story of science, it simultaneously illustrates many aspects of the minority experience in this country. Skloot weaves together, nearly flawlessly, the story of Henrietta Lacks (and her family) and the story of HeLa. Henrietta was an African-American woman, a poor Southern tobacco farmer. HeLa is the name given to the sample of cancerous cervix cells taken, without Henrietta’s knowledge, when she was at Johns Hopkins receiving medical care for her cervical cancer. These cells were the first that scientists were able to keep alive (and grow) and have since been vital in an innumerable number of scientific discoveries and advancements, such as developing the polio vaccine, uncovering secrets of various cancers and effects from atom bomb radiation, and helping advance procedures such as invitro fertilization and cloning. HeLa cells have been bought and sold by the billions, while no one knew (or even thought to ask) about Henrietta Lacks or her family.

I learned so much from this book. Even considering that I only really absorbed three quarters of the specifics about the science discussed, I can truthfully say I have a grasp, if still minimal, of the theories and mechanics behind cell and tissue research. And, though my prior knowledge of this was still better than on the scientific side of things, I still learned a lot about the history of science and minorities in the US, particularly surrounding the [abysmal] treatment of African Americans in the South, who suffered grievously in the name of science and the “betterment of the population in general.” We see this clearly not only in the way that Henrietta’s cells were taken and used without her knowledge, but also in how little her family was told over the years as her identity was publicly shared and ever more scientists and journalists contacted the family asking for samples and stories, respectively, while never offering information in return. The way this affects the family both past and present, as far as institutionalization, health scares, emotional distress, social disadvantage, and many other important ways, is something that we are all responsible for addressing. When Skloot began her research, it took years for the family to trust her enough to share their stories and fears, and agreed only when Skloot promised that she would keep them completely involved and informed. For the most part, all they wanted was information about their mother/grandmother and clarification of what taking her cells meant and what they had done for the world…and no one had ever taken the time to give that before. It’s heartbreaking to see something so important worldwide be mostly unshared, and misunderstood, by those closest to it.

You can tell how much the author cared about the topic, how much time she put into the research and writing of this book (10 years!!), and how careful she was to make sure that she told a straightforward, unbiased, inclusive version of the HeLa cell. Skloot talks, in a quick interview at the end of the audiobook, about how she wanted to present a complete story: one that included science’s “side,” the family’s story, and the related interactions. She also wanted to make sure that she gave a truthful picture of the situation. As we read and see the disadvantage of the Lacks family, despite everything gained by science from their mother (gains both educational and financial), we emotionally want restitution and to take down the big bad researchers. It’s hard not to. But Skloot does a great job presenting that, within the consent requirements and laws of the time, and in some cases still today, there was nothing unlawful about the actions of the doctors as Johns Hopkins, or following that, the researchers that cultivated, disseminated, and studied her cells. It does not sound morally right, and there are many layers of racial advantage that must be taken into account, but it was technically above water. And although we can be angry that Henrietta’s (and therefore her family’s) cells were taken and information was released without consent, and we can demand that informed consent and full disclosure and education for all patients being required in the future, we also must accept that HeLa cells have been absolutely invaluable to science and health throughout the world.

Many things have and still are changing in the world today, related both to racism/marginalization and the regulations of scientific research conducted on human subjects, but there is still a long way to go. The Afterward was a phenomenally written ending to this story. We get to see, in a bigger picture, how frighteningly complex the issues of cell and tissue research and donation are. Skloot talks through both sides of the argument, for and against, informed consent and financial stake in this situation. The moral, ethical, and legal battles surrounding this issue, the idea of the commercialization of tissue research (and research in general), the interdisciplinary nature of the issues, and the ever-present power struggle between individuals and corporations with boundless resources are all incredibly sensitive topics. After reading this novel, I understand how this is something that will take years more to work through a solution. Skloot said her goal for this book, along with telling the world Henrietta’s story and encouraging scientists to start to think about where their samples come from, was to work for awareness and an exploration of the complexity of this cell and tissue donation/research issue. And I believe she absolutely achieved that. Expertly written and beautifully told, I would highly and widely recommend this read.”

One thought on “The Immortal Life of Henrietta Lacks”